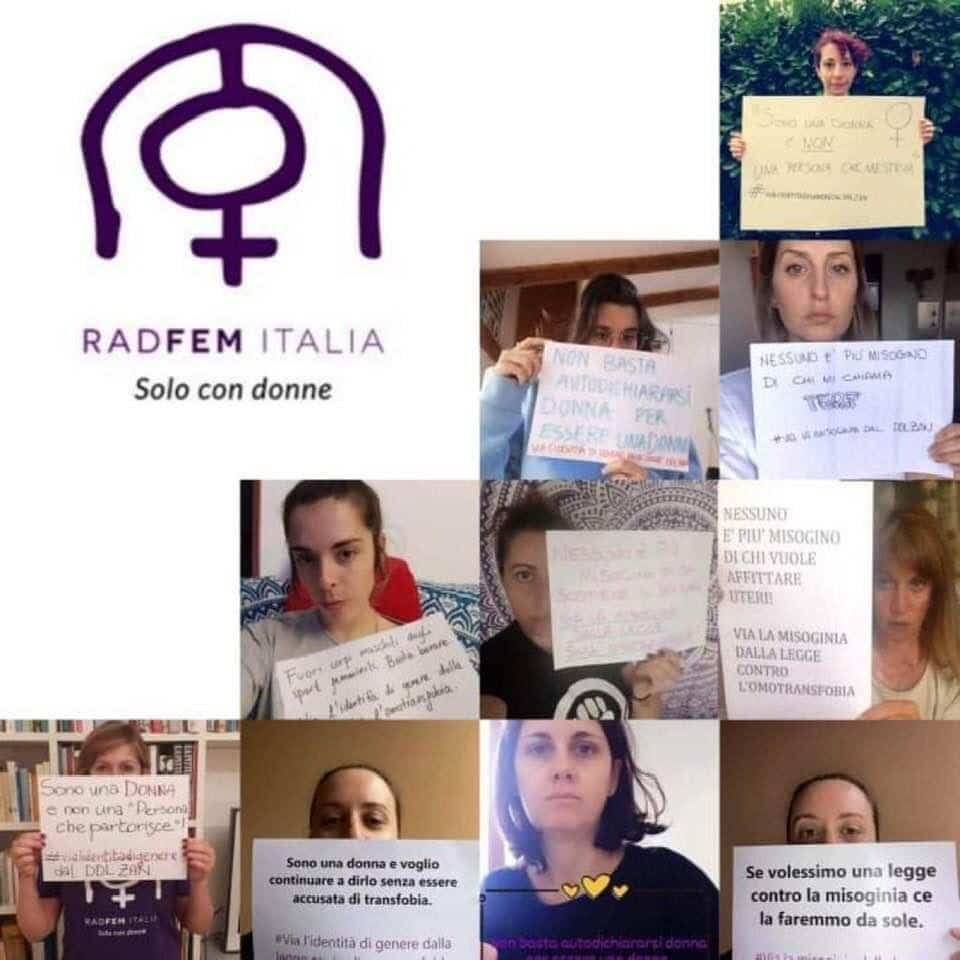 The real name of Zan's bill, which was blocked a few days ago in the Senate, should have been the bill on gender self-certification and not against homotransphobia. That was the real objective, the self-id, and that is why the law has stalled. Sacrificing the rightful protection of homosexual and transsexual people to the arrogance of queer transactivism.
bill zanddl zanfemminismoidentità di genereself idtransgender
Condividi questo articolo

A brief comment, after the filing of Zan's bill on homobi-transphobia, mainly intended for the non-Italian sisters and friends who ask us to explain; and for those Italian women who are still unclear about what happened.

About a year ago, Zan's bill against homobi-transphobia was approved in the Chamber of Deputies amidst general silence and inattention. At that stage, the media completely obscured the debate, while the ongoing Covid wave - in Italy the vaccination campaign had not yet begun - was catalysing the attention of public opinion. The centre-left had voted compactly in favour, something that was not repeated when the bill reached the Senate for final approval. The truth is that most women deputies, and men, as some of them (including Stefano Fassina) later acknowledged, did not really understand what they were approving. Convinced that they were voting for a law against hate crimes against homosexuals and transsexuals, they had not understood that the real core of the law was gender identity, the first step in the direction of self-id.

In Italy there is a law in force, 164/82, not dissimilar to the English Gender Recognition Act, which regulates the path to "sex change", a path that ends with a court ruling. This law has been updated over the years by a series of rulings: for example, surgical mutilation is no longer required to obtain a sex change on documents. However, it remains necessary to go through the whole process, with expert opinions and a final ruling. What the Zan bill intended to introduce surreptitiously was self-certification of gender or self-id.

The deputies, we said, had not understood this. Many citizens have not understood it even today. But we radical feminists did, as you can see from the picture above, which is over a year old. The fight has been bare-knuckled, and very hard indeed, particularly on two fronts: 1. to break the silence of the media 2. to talk to the centre-left - the political area of the vast majority among us - to make changes to the text of the bill.

We have achieved the first objective to some extent: with great effort we have managed to "break through", we have done a great job on social media, we have appeared in the newspapers, we have snatched a few passages on TV, we have been heard in the Senate. The second objective, to talk to the proposers, we have completely failed. With very few exceptions, no one has ever wanted to listen to us and discuss with us, from the first signatory Alessandro Zan, to the secretaries of the left-wing parties (PD, M5S, LeU), to the women of those parties.

An insurmountable wall, an absolute deafness, accompanied by misogynistic contempt: you are a retrogressive minority, you do not represent anyone, and so on.

Our objections were well-founded and reasonable: in addition to the rejection of gender identity (art.1), we asked that the law should not be extended to misogynistic hatred - women are not a minority to be protected but the majority of mankind, and feminism had never asked for such a law, especially if it was granted by misogynists in favour of surrogacy and sex work. We demanded that transactivist propaganda be kept out of schools (art. 7) and that freedom of expression be truly guaranteed (art. 4).

We even proposed a return to an earlier bill (Scalfarotto-Annibali) that would have truly guaranteed the protection of homosexual and transsexual people.

Our arguments were taken up and used by right-wing parties and moderates: it was really surprising to hear conservative MPs mention Judith Butler and transhumanism. But, as we have seen, they also made inroads with a small part of the left, who ultimately did not support the bill, which lacked the necessary numbers to proceed through the Senate. This was our victory.

We have a well-founded suspicion that a part of the same proponents wanted to stop the law, which if approved would have opened scenarios really difficult to manage and justify in front of a public opinion largely unfavourable to self-id, but still unaware that the real objective of the bill was that.

And it is a real pity that homosexual and transsexual people did not get the protection they were asking for because of the arrogance of queer transactivism: they are the real homophobes and transphobes.

For us and for all, a lesson: never give up. Today we say this especially to our Spanish and German sisters who are fighting against similar laws. We would never have believed we could do it, with our bare hands, against a universal mainstream in favour of the bill, but we did not let ourselves be discouraged and we achieved our goal, albeit bitterly. And above all, to demand that things be called by their real name. Do not allow a law whose aim is to introduce self-id to be presented as something else, masking the real aim behind more reasonable and agreed proposals.

Whenever you see gender identity mentioned, sharpen your ears, and get ready to fight.