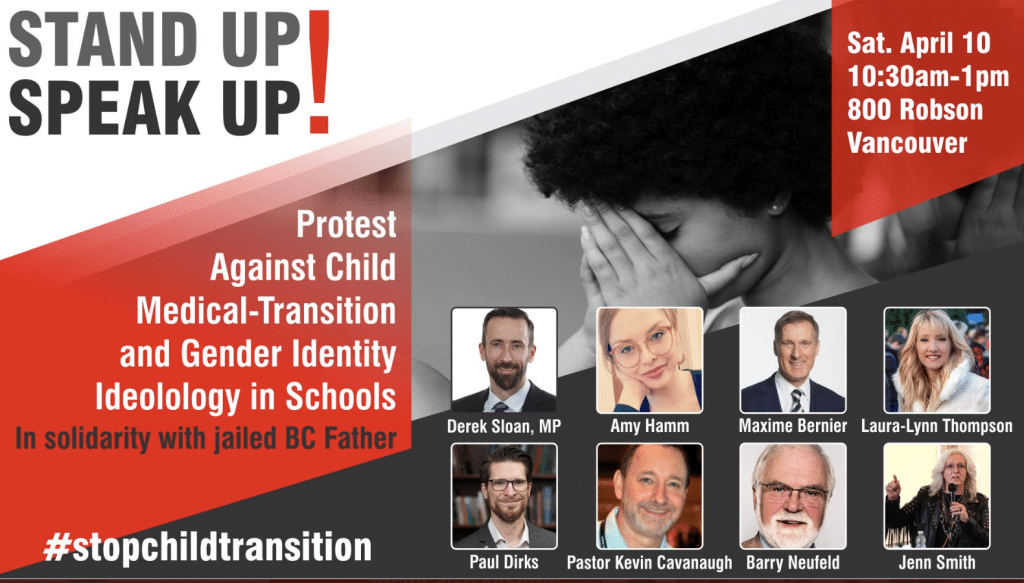 Women fighting for the health of girls and boys

minorspuberty blockertavistock clinictransitionUKvancouver. the times
Please be aware that the translation of contents, although automatic, has a cost to Feminist Post but is provided to you without any charge. Please consider making a contribution via the "Support us" page if you intend to use our translation service intensively.
The contents of this site are translated using automatic translation systems without the intervention of professional translators.
Translations are provided for the sole purpose of facilitating reading by international visitors.
Share this article

While A non-partisan demonstration against the transition of girls and boys and in support of the imprisoned father will be held in Vancouver on Saturday 10 April. (see here) for speaking out against hormone therapy given to his 14-year-old daughter in the UK. The Times returns again to the health risks of 'non-compliant' minors treated with puberty blockers, after thousands of disastrously administered therapies, see here (authorised therapies also in Italybut in our country almost all media and politicians ignore the problem).

Women have great merits in this struggle for the risk disclosureGender-critical feminism also focuses on the bodies of girls and boys.

The alarm for health impacts of the administration of puberty blockers and cross-sex hormones young people grappling with gender identity has prompted calls for a review of their use in Scotland.

The National Institute for Health and Care Excellence (Nice) stated that existing drug studies had been carried out on samples too small and "subject to prejudice and confusion".

There is also research published by the British Medical Journal which described how children on puberty blockers at the end of treatment, at the age of 16, experienced a reduced growth in height and bone strength.

Lo Scottish Intercollegiate Guidelines Network (Sign), which provides clinical advice to the NHS, was invited to a review of studies, for the concern that eight-year-olds can be prescribed these drugs.

"It should be one national scandal, let's hope that the next elections will force our politicians to reflect on their responsibilities and that this medical experiment will be stopped immediately, pending a full review"said Trina Budgewho directs For Women Scotland.

One concerned woman who was told that her daughter was suffering from gender dysphoria said: "The conclusions are quite overwhelming and show that it is an experiment. Anyone can suggest an issue to Sign to look into, so I'll ask them to look at Nice's review ".

I puberty blockers, known scientifically as gonadotropin-releasing hormone (GnRH) analogues, are prescribed to young people with gender dysphoria - distress caused by a discrepancy between the 'perceived' gender and one's sex at birth. They act on the brain to block the increase in sex hormones - oestrogen and testosterone - that accompanies puberty.

The effects of the drugs were touted in Scotland as 'completely reversible', but last year NHS Greater Glasgow and Clyde withdrew their pamphlet on gender dysphoria and apologised after a complaint that potential long-term effects had not been clarified.

The Nice findings, published last week, were commissioned by NHS England in support of an independent study by paediatric consultant Hilary Cass into gender identity services for children and young people.

Nineteen separate studies were reviewed, including nine that looked at the impact of puberty blockers on dysphoria, mental health problems - such as depression, anger and anxiety - and the quality of life of recipients. Nice, which provides guidance and advice on improving health and social care, said: "The quality of the evidence underpinning these results offers very low certainty.". He noted that the evidence on the clinical efficacy and safety of cross-sex hormones was also of "very low" quality, adding: "Any potential benefit of gender-affirming hormones needs to be assessed against the largely unknown long-term safety profile of these treatments in children and adolescents with gender dysphoria".

Neither review includes recommendations and both constitute advice rather than formal guidance.

In February, however, a study published in the British Medical Journal warned that children aged 12 to 15 years who were prescribed puberty blockers experienced reduced growth in height and bone strength at the end of treatment at the age of 16. The findings were based on a study of 44 children treated at the Tavistock and Portman NHS Trust, which runs a gender identity service.

Last December, in a In a case brought by Keira Bell against the Tavistock and Portman NHS Trust, the High Court ruled that children under the age of 16 could only consent to puberty blockers if they were truly able to "understand the nature of the processing". But in a move that is likely to partially overturn that ruling, the court ruled last month that parents can allow their children to receive puberty blockers without requiring court approval.

Insights
Girls, Gender identity
I thought my son -4 years old- was trans: I was wrong
Lesbian mother and 'true believer' of the queer cult accompanies and authorises her child to identify as female. Until she realises she was wrong because of ideology. Weeping over her mistake today, she has embarked on a path of 'healing' together with him who has returned to calling himself male. An enlightening testimony
I was a true believer.I was a social justice activist before the social justice movement took over the world. I was at the forefront of introducing the concept of intersectionality in progressive organisations and convincing people to share their pronouns. My friends and I felt like the "cool" ones, the vanguard of a revolutionary work that would change the world, that would achieve what people within the social justice movement call "liberation [...]
Read now
1 2 3 ... 19 Next »