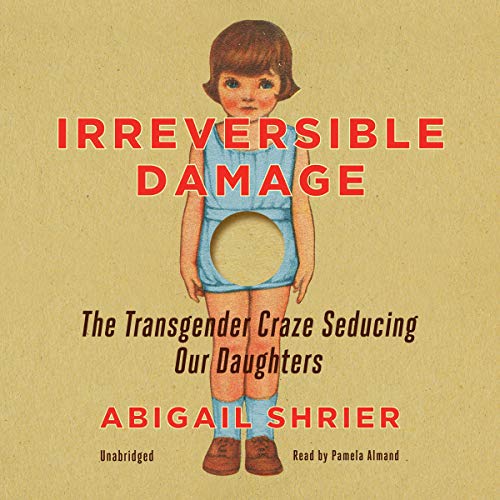 Irreparable harm: the new violence against girls and young women

abigail shrierdetransitionerminorsgirlstransactivismtransitions
Please be aware that the translation of contents, although automatic, has a cost to Feminist Post but is provided to you without any charge. Please consider making a contribution via the "Support us" page if you intend to use our translation service intensively.
The contents of this site are translated using automatic translation systems without the intervention of professional translators.
Translations are provided for the sole purpose of facilitating reading by international visitors.
Share this article

Abigail Shrier is a freelance journalist who has recently been writing mainly for the Wall Street Journal. The idea for his book Irreversible Damage: The Transgender Craze Seducing Our Daughters (Regnery Publishing, among the best books of the year according to The Times e The Sunday Times)essay analysing themore than 3000 per cent increase in gender dysphoria among adolescent girls, The Transgender Language War came about after I wrote an article about the new legislation in several US states requiring health care personnel to use the gender requested by patients in order not to risk serious legal consequences.

The title -Irreparable damage: the transgender madness that seduces our daughters-summarizes the author's conclusions after 18 months of investigation: through multiple interviews, discussions with doctors and psychotherapists, and an examination of the protocols followed by the American health and education systems, Shrier was able to highlight that for girls in this decade the arrival of adolescence is a much more traumatic experience than in the past. The typical feeling of inadequacy and malaise, which should be considered physiological and prodromal to growth, and the search for homologation among peers, are not seen as a necessary passage of transformation towards adulthood, but as a discomfort produced by today's most fashionable condition, 'gender dysphoria'. If a girl does not accept herself, does not like herself and would like to hide her incipient femininity, it is because she is actually a male trapped in the wrong (female) body, a conviction often matured in total autonomy by minors thanks to the Internet and to the group of friends who suffer from the same "symptoms". Gender transition is seen as the panacea for all adolescent ills because it brings with it the success and social approval of political correctness, in everyday life and on social media.

Shrier also notes that the health and education systems, instead of helping self-diagnosed 'dysphoric' girls to reflect, supporting them and providing them with tools to cope with their discomfort, anxiety and depression and to reconcile them with their bodies and their biological sex, they legitimise to the hilt the 'self-determination' of teenage girls and the infallibly initiate the transition. First with puberty blockers, then with opposite-sex hormones and finally with surgical treatments (mastectomy, hysterectomy and others), without taking into account the fact that an adolescent is not capable of self-determination and that all the above-mentioned treatments, starting with puberty blockers, have a negative impact on his or her health. irreversible effects and cause irreparable damage. Parents who do not espouse their teenage daughter's choice are disempowered by the system and often alienated from their daughters.

The vicious circle has become established over the last decade, But today we are beginning to hear the voices of those who, having embarked on this path, have repented and 'detransitioned', returning to affirm their biological sex, albeit with now irreversible physical consequences and even mutilation. From Shrier's accurate and factual narrative emerges a sterrifying situation that generates a sense of fear and powerlessness in any parent.. What is providing fuel for this grotesque and horrific system are economic and political interests, disguised as a worthy acceptance of diversity at 360 degrees.

Shrier suggests that parents should not give in, to fight, to be supported by the many associations that are springing up to oppose the politically correct system of accepting the 'self-determination' of adolescent girls, in the hope that the voice of the many girls who have detransitioned will be heard more and more loudly, and finally change the medical, scholastic and political approach to this 'madness'.

Unfortunately, we are still a long way off. Many voices have been raised against Abigail Shrier - the book has been called transphobic, has been temporarily removed from sales, and is now on sale. by Target, and a petition was even promoted to have it removed from Amazon (not to mention the protests of Spotify workers when the platform hosted a podcast of an interview with Shrier). But the essay is still on sale, the interviews are available, the debate is inflaming the pages of the web and despite the mobilisation of forces to silence the alarm siren that has sounded, its sound is still heard, and louder and louder.

Insights
Girls, Gender identity
I thought my son -4 years old- was trans: I was wrong
Lesbian mother and 'true believer' of the queer cult accompanies and authorises her child to identify as female. Until she realises she was wrong because of ideology. Weeping over her mistake today, she has embarked on a path of 'healing' together with him who has returned to calling himself male. An enlightening testimony
I was a true believer.I was a social justice activist before the social justice movement took over the world. I was at the forefront of introducing the concept of intersectionality in progressive organisations and convincing people to share their pronouns. My friends and I felt like the "cool" ones, the vanguard of a revolutionary work that would change the world, that would achieve what people within the social justice movement call "liberation [...]
Read now

International news
Girls, Gender identity
Holland also puts the brakes on 'trans children'
The 2006 study on which the so-called 'Dutch protocol' exported worldwide is based - the administration of puberty blockers to minors with gender non-conforming behaviour - was financed by the pharmaceutical company that produces the blockers, and has been discredited several times. As in the UK, Sweden, Finland, even in that country they are now calling for a stop to these 'therapies' that cause serious damage to health.
The treatment of children with gender dysphoria with puberty blockers is called the 'Dutch protocol'. And it is based on a single study from 2006 that introduced the concept of 'sex change for transgender children' and was allegedly financed by Ferring Pharmaceuticals, the company that markets tryptorelin, the drug with which the natural development of girls and boys is stopped. This was revealed in a report by journalist Jan Kuitenbrouwer and sociologist Peter Vasterman recently published in the NRC Handelsblad, [...].
Read now
1 2 3 ... 13 Next »