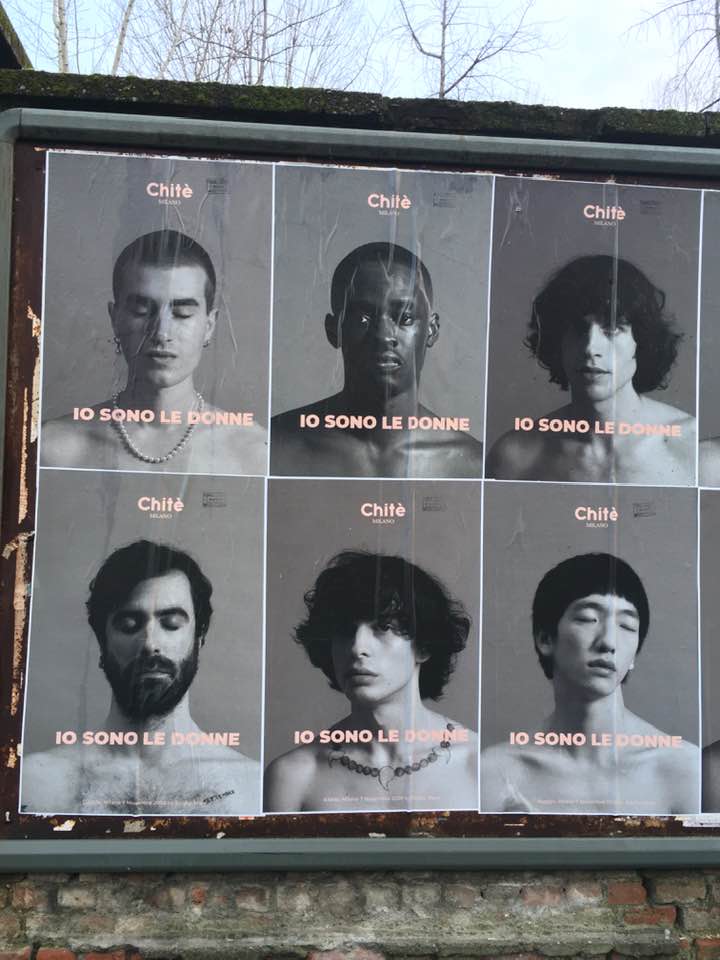 THEY are the women

genderfluididentity by genrequeertranscult
Please be aware that the translation of contents, although automatic, has a cost to Feminist Post but is provided to you without any charge. Please consider making a contribution via the "Support us" page if you intend to use our translation service intensively.
The contents of this site are translated using automatic translation systems without the intervention of professional translators.
Translations are provided for the sole purpose of facilitating reading by international visitors.
Share this article

They are the women (poster on the walls of Milan, a women's lingerie brand or something like that, apparently they want to launch a new brand for Valentine's Day. pants genderless). Indeed HE is women (one is enough for all).

Nothing else to add. It is their all-time envious dream, from Aristotle onwards*. Taking the place of women. To give life in their place. Making them abject. Lock them up. Hide them. Veil them. Erase them. Replace them. They are the women. We are, at best, 'menstruators' or 'people with cervixes'.

They will say, I could swear, that it is a "solidarity" campaign. That we're making a huge mistake! That they are 'on the side' of women. That what is done to women is also done to them. But the medium is the message. And this image is very violent for US WOMEN. It comes like a punch in the stomach.

This image consciously uses the mainstream language of gender identity, queer ideology, genderfluid, no-binary, of being a woman by choice and not by birth. (those by birth are only vile cis-, the lumpenproletariat of womanhood), theinner feelingof self-determination and self-certification. Fashion communication winks a lot at this stuff, at the transhuman code which today prevents us from naming ourselves as women and which sanctions us as transphobic and violent when we do. Which therefore makes the mere naming of women a real political act.

No, you are not women. You would like to be, always have been. But women are WE. And we are not men. We cannot be forced to be apes of men in order to live and act freely in the world.

Get those posters off the city walls.

* According to Aristotle, the active male is the true parent that gives form to the inert female matter., the woman is 'passive'. as "is that which generates in itself and from which is formed the generated that was in the parent"(the male).

It all stems from womb envy and is called patriarchy.. The queer is fully part of the phenomenology of patriarchy. These are just the new phenomenological figures added to the old ones.

It is a very hard time for women. It is the tail flick of the dying animal.

Insights
Girls, Gender identity
I thought my son -4 years old- was trans: I was wrong
Lesbian mother and 'true believer' of the queer cult accompanies and authorises her child to identify as female. Until she realises she was wrong because of ideology. Weeping over her mistake today, she has embarked on a path of 'healing' together with him who has returned to calling himself male. An enlightening testimony
I was a true believer.I was a social justice activist before the social justice movement took over the world. I was at the forefront of introducing the concept of intersectionality in progressive organisations and convincing people to share their pronouns. My friends and I felt like the "cool" ones, the vanguard of a revolutionary work that would change the world, that would achieve what people within the social justice movement call "liberation [...]
Read now
1 2 3 ... 34 Next »