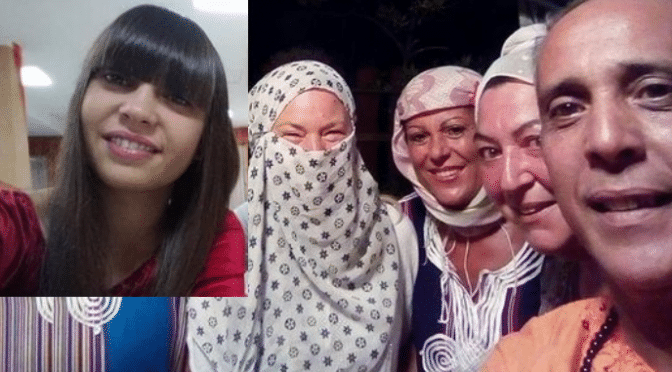 IslamMalika Chalhyhomophobiapatriarchate
Please be aware that the translation of contents, although automatic, has a cost to Feminist Post but is provided to you without any charge. Please consider making a contribution via the "Support us" page if you intend to use our translation service intensively.
The contents of this site are translated using automatic translation systems without the intervention of professional translators.
Translations are provided for the sole purpose of facilitating reading by international visitors.
Share this article

Malika's story is horrifying, that's for sure. When expressions such as "I'll cut your throat.things are going very badly indeed. They are probably customary expressions when running domestic violence. And violence against women is an incredibly widespread phenomenon. Only this time, unlike usual, the verbal violence was recorded and broadcast online and on TV.

Malika Chalhy has a brother called Samir, her father's name is Aberrazak (Moroccan origin). Her mother is Italian.. He shoots a photo with the whole family veiled: the photo is real - taken from the father's FB profile - it is not a fake, but women wear the veil at a festival. We do not know whether Malika's family is a traditionalist Islamic family. We do know, however, that all media have deliberately omitted to mention that Malika's father is of Muslim background.

Even more than the terrible, visceral and angry words of the mother, the following are striking brother Samir's threats: 'I'll cut your throat', 'you're a cancerous lesbian'. Nowadays it is quite difficult for a young man in his twenties to react in this way to the news that his sister is homosexual. He may feel bad, be perfectly indifferent or sympathise with her. That kind of reaction speaks of a culture of control, possession and domination that is quite unusual in our part of the world today, among brothers and sisters (it was not so in the past). So of a robustly patriarchal attitude, which relates to the duty to save the honour of the family, transmitted patrilineally and guaranteed by the women of the house who are forced to pass on 'values' and genealogical self-sexism. But here we are moving into the realm of hypotheses.

Staying with the certainties: Malika was treated horribly; the media deliberately chose not to talk about the origins of the family. An ideological choice which is very similar to the silence on 'ethnic' rapes in Northern Europe: the Swedish police itself admitted that it had long kept silent on sexual violence by young immigrants in order not to offer arguments to the xenophobic right. Also in this case it is considered more appropriate and more correct to target generalised homophobia than the culture of patriarchal domination.

But the story of Malika, who rightly rebelled, may perhaps resemble that of the Pakistani-Brescian Hina Saleem more than it appears, killed by her father with the help of relatives because she had an Italian boyfriend and wanted to live like all her friends: 12 years after her death her brother Suleman removed the photo from her tomb at the cemetery because she appeared 'too naked' in that image. She could, I say, but theThis hypothesis must be taken into account. And it cannot be taken into account if, against all deontology, the media conceal part of the news, we might even say censor it, so as not to go looking for trouble and not to appear culturally incorrect.

From internal' crossbreed (father from the north, mother from the south), my life and my body have been a battlefield between a violently patriarchal culture, paradoxically embodied by a mother who was herself a victim and a rebel, and a decidedly more open culture that my father, the son and grandson of already emancipated women, was the bearer of. I know those dynamics intimately, and I recognise them every time with deep pain.

Maybe Malika is a victim of homophobia, and is well suited as a symbol of the battle for the Zan ddl -which should focus on this and leave gender identity alone-. Or maybe things wouldn't have been so different if Malika had had a male boyfriend who didn't like her at home. Perhaps, more routinely - and it's all part of it - Malika is a victim of male domination, the kind that fills statistics and in its 'naturalness' continues not to make the headlines.

Italian news
Maternity, PAS
Giorgia's father
Stigmatised also from the left is Rula Jebreal's vulgar attack that places the blame for an unreliable and absent father on Meloni. Absence that may rather offer a key to her political rise to control of a male party. And also her focus on motherhood
In her vulgar attack, stigmatised by the right and the left, Rula Jebreal claims -on the basis of a Spanish press scoop- that 'Meloni's father is a notorious drug trafficker/convicted criminal who has served time in a prison' when she 'states that asylum seekers are criminals who want to replace whites' (again for the record, Meloni has announced that she will sue Jebreal for attributing this statement to her). The right-wing leader has never made any secret of her abandonment [...]
Read now

Italian news
Politics
When abortion matters to men
Totally ignored by the right and left in peacetime, the issue of abortion becomes central when men fight for their power. But if there is a 'Marche case' there is also a 'Emilia case', a red region: the same percentages of objection and no abortion pill in the consultatories. We women must not take part in this filthy dispute over our flesh, siding with one or the other supporters.
Women - or rather, so-called 'women's rights' - have been instrumentally thrown into the centre of this horrific election campaign, probably the worst ever. Not the low female employment rate, the gender pay gap, the lack of services that forces us into the living welfare part, violence and feminicide, the machismo of politics and all that we know and experience. The issue of issues is abortion, fished out of the oblivion in which it is normally confined -no party [...]
Read now

Italian news
Politics
A POLITICAL HORIZON COMMON TO WOMEN OF ALL PARTIES
In the sign of Carla Lonzi forty years after her death: women voters and activists from all parties unite in the gift of a common 'unexpected programme', a horizon for a change of civilisation
"Will women always be divided from one another? Will they never form a single body?" (Olympe de Gouges, 1791) On the 40th anniversary of Carla Lonzi's death. We are women who vote for every political party. We live in every part of the country. We belong to every social condition. We are mothers and non-mothers. We have a faith, or we are agnostics, or atheists. We are held together by being women and the knowledge that what is good for a woman and her daughters/daughters is good [...]
Read now

International news
Girls, Radical Feminism, Gender Identity
UK. Black week for the glittering trans-patriarchy: closed the Tavistock, gender clinic for children. And Allison Bailey wins in court: she was discriminated against for her gender critical views
The ideology of gender identity under attack in UK: NHS orders closure of paediatric transition clinic and points the way to psychological therapies. And Allison Bailey wins employment tribunal case backed by JK Rowling: employer ordered to compensate her for putting her 'under investigation' because of her gender critical views. At the suggestion of Stonewall, who comes out of it with her reputation in tatters
CLOSES TAVISTOCK, CHILDREN'S TRANSITION CLINIC: 'AFFIRMATIVE' APPROACH (DRUGS AND SURGERY) IS DANGEROUS FOR YOUNG PATIENTS The news is sensational: the British National Health Service (NHS) has ordered the closure of the Tavistock & Portman gender clinic for failing to ensure the safety of young patients, most of whom are girls (full article here). The clinic has been accused by several parties of hastily initiating many minors, most of them suffering from spectrum disorders [...].
Read now
1 2 3 ... 22 Next »