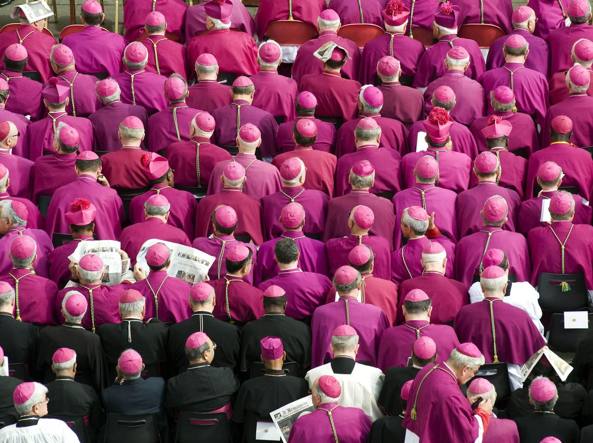 Diplomatic relations between Italy and the Vatican are not our business. On the other hand, we have the utmost competence on the many worrying critical aspects of the Zan bill. We have long asked to be heard. Now we no longer ask. Ask them
concordatddl zanpatti lateranensiPdVatican
Please be aware that the translation of contents, although automatic, has a cost to Feminist Post but is provided to you without any charge. Please consider making a contribution via the "Support us" page if you intend to use our translation service intensively.
The contents of this site are translated using automatic translation systems without the intervention of professional translators.
Translations are provided for the sole purpose of facilitating reading by international visitors.
Share this article

Diplomatic relations between Italy and the Vatican are not our concern, at least no more than any other citizen. Each will legitimately have its own opinion. Some will see the Vatican's action as undue interference, others as a legitimate call to respect pacts between states. Others will remain perfectly indifferent.

On the other hand, the matter on which the crisis is being exercised - the contents of the Zan bill - is our responsibility. We are probably among those who know most about these issues. In Feminist Post you will find all possible critical arguments related to the contents of the draft law probed far and wide.

A year ago we were a voice in the wilderness. The approval of Zan's bill in the Chamber of Deputies last November took place - deliberately - in semi-clandestine fashion and in the general silence of the media.. We have done everything we could, and more, to ensure that these issues of enormous human and political relevance would instead become a reality. subject of public debate, as is finally happening. We have, let's say, made a major contribution to the awakening, and we are very satisfied with our work.

We have offered hundreds of opportunities for the proposers of the bill to discuss it constructively, but every invitation to do so has been rejected with a misogynistic contempt that we did not expect. and which will not remain without consequences, including at the ballot box. They did not listen to us and instead pointed us to public hatred. But the rest of the audience heard.

So let them ask to meet with us today if they feel it is useful and appropriate. We have a lot of important things to say. We are no longer asking for this, and remain firm on our reasoned positions.

The astonishment remains to have seen the proponents, with particular reference to the Pd, cplay the political game badly by stubbornly going down a dead-end street like foolish men. but then complain - always and only in private - that they do not know how to get out of the trap. To realise, as many have observed, that The issue of freedom of thought and opinion, which has always been the heritage of the left, is now being held up by the right. Also with regard to the historical and well-established relations of that party with the Churchthe stolidity of failing to pick up on visible signs of impatience, leading to an unprecedented break.

Again, this is not our concern. What is our business is to reiterate our positions on the text of Zan, which remain as they always have beenwithout hesitation, in resonance with the positions of feminism, which throughout the western world is struggling against self-perceived gender and the erasure of women: no to gender identity -to be replaced in the text by transsexuality or transgender identity, Away with the term sex, which introduces misogynistic and misandric hate crime (!), out with transqueer propaganda from schools.

We also suggest drawing on another bill presented by the centre-left and shared by a large part of the centre-right, the Scalfarotto-Annibali bill, which would offer a good way out and ensure an effective law against homotransphobia.

Take a tour of the Feminist Post and you will find all possible arguments to support these positions.

International news
Girls, Gender identity
UK: Sirens no longer wallow
Under investigation is Mermaids, a British 'charity' that deals with the transition of minors, in order to ascertain the criteria of its activity that according to detractors encourages girls and boys on the road to 'free gender identity'. Meanwhile, President Susie Green has abruptly resigned and many organisations and government bodies, starting with the Department of Education, have stopped working with the charity and suspended public funding.
A few weeks ago Susie Green, leader of Mermaids, a British 'charity' that deals with children's transition, suddenly resigned from her post without giving any explanation. It is a sign that something is not working among the Mermaids. Mermaids was founded in 1995 and composed exclusively of volunteers until 2016, when Green became president. It is based in Leeds, with an office in London, and has 44 staff members and 110 volunteers. The government's Charity Commission has initiated [...]
Read now

International news
Girls, Gender identity
England: new guidelines for 'trans' minors
While Spain is about to approve the horrifying Ley Trans, which allows the transition of girls from the age of 12 even if their parents oppose it, the English health service closes once and for all with the so-called pharmacological 'affirmative approach' (puberty blockers) practised for years and points to psychological treatment as the priority route. And in Italy? For the Italian Society of Paediatrics, these drugs do not cause any problems and their effects are completely 'reversible', a fact denied by several studies
The English health service (NHS) has published a new draft of guidelines for the treatment of children with gender dysphoria (full text here), pending the results of the Cass Review, an independent enquiry commissioned by the British health minister and led by paediatrician Hilary Cass (see here), which will lead to a complete restructuring of services dedicated to gender non-conforming children. After the closure of the Tavistock clinic -which we told you about here-, NHS puts a definitive end to the so-called [...]
Read now
1 2 3 ... 40 Next »