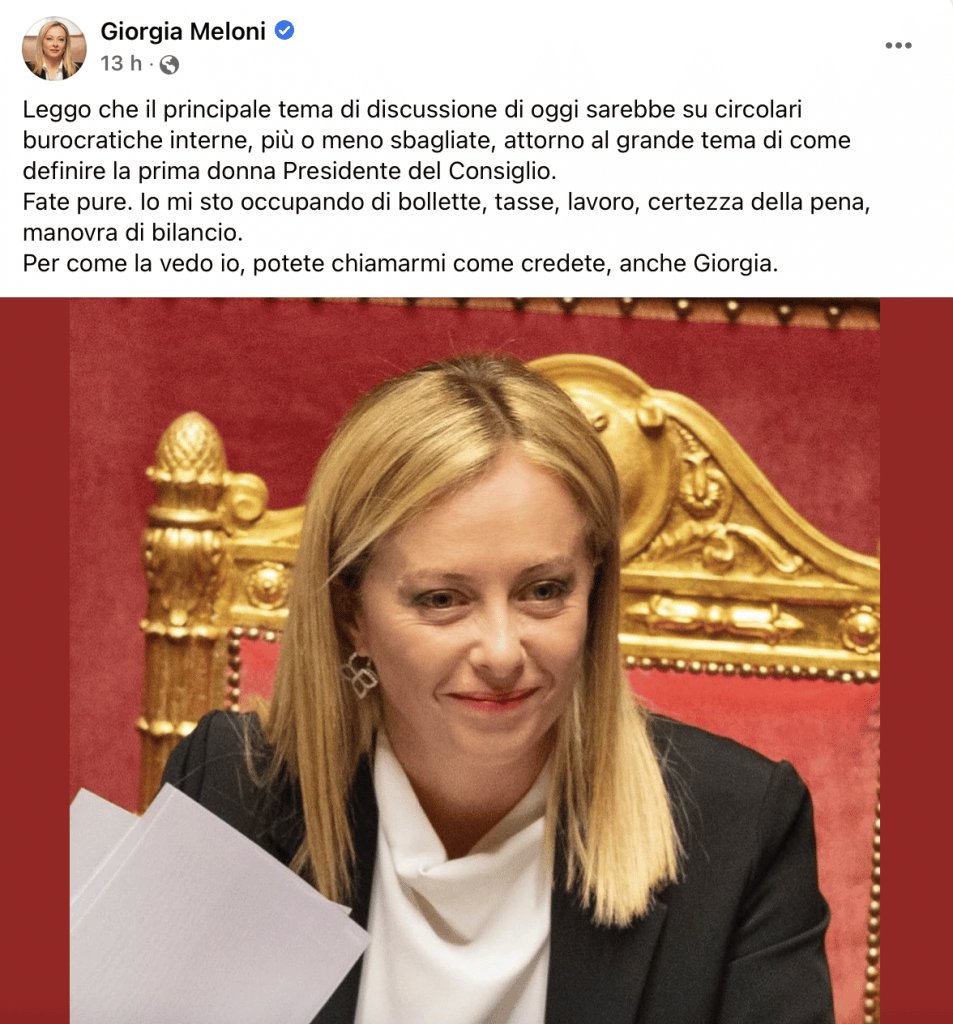 Giorgia Meloni is not a feminist. Her history is not this. She has not shared in the long battles over language, over declension into the feminine instead of the neuter-masculine. But language today is a battleground that structures the most important political issues. And it deserves further reflection on her part
jorgia melonslanguage
Please be aware that the translation of contents, although automatic, has a cost to Feminist Post but is provided to you without any charge. Please consider making a contribution via the "Support us" page if you intend to use our translation service intensively.
The contents of this site are translated using automatic translation systems without the intervention of professional translators.
Translations are provided for the sole purpose of facilitating reading by international visitors.
Share this article

Giorgia Meloni is not a feminist. This is not his story.

No woman on the right or centre-right who has held important political office, from Thatcher to Merkel, has ever called herself a feminist. Hence the non-sensitivity to the feminine declination of one's position, to which feminism instead gives importance.

Even if Angela Merkel at the end of his long chancellorship, during a meeting with the writer Chimamanda Ngozi Adichie, agreed to call herself a feminist. According to Alice Schwarzer, founder of the magazine Emmaher reluctance to take openly feminist positions was a price she had to pay for joining a conservative ruling class that until then had been entirely male: Merkel, Schwarzer concludes, However, she leaves behind a legacy that can be defined as feminist because so many girls and women consider her a source of inspiration. To put it this way, Merkel 'tried'. She tried as often as she could to escape the trap of the neutral and not renounce the difference of her look as a woman.

It may be that something like this will happen to Meloni, if her premiership is long enough. Or not. At the moment the matter is simply irrelevant to her, the battle over language has no political significance for her. For us feminists, it has always had a lot.

Net of the excess of bureaucratic zeal of internal communiqués, which indicate as the correct wording LORD President of the Council -declaration that Meloni herself later corrected and tempered-, the male declination THE Prime Minister remains. Although on her being a woman, the neo-premier has insisted, her close staff is almost entirely female and for the closing batch of undersecretaries she has expressed a willingness to have more women. The quaestio nominum dismissed it as follows: 'I read that the main topic of discussion today would be on internal bureaucratic circulars, more or less wrong, around the big issue of how to define the first woman President of the Council. Go ahead. I am dealing with bills, taxes, jobs, certainty of punishment, the budget manoeuvre. The way I see it, you can call me whatever you like, even Giorgia".

Policies for women will count a lot, sure, as they counted for another, Angela, who will eventually remain in history under her own name. But the question of language today is decisive, not at all neutral, and informs and structures the most important political battles. Meloni should do some additional thinking on this.

It remains strange that those who claim the right of everyone to be named and declined as they see fitfeminine even if it is a man or masculine even if it is a woman, otherwise it is misgendering -freedom then denied in fact by the imposition on women of verbally violent definitions such as 'people with wombs', never, instead, 'people with prostates'- stigmatise Meloni for her neutral-masculinity. Something does not add up.

Italian news
Politics
The symbolic is political
Giorgia Meloni's 'no' to Silvio Berlusconi's wishes has been described as a nemesis: a young woman who sinks the old leader -'dragon devourer of virgins' defined him as the 'ex-wife' - and does not shy away from friends and foes alike. An unexpected twist in our misogynistic politics. Although the future premier has never called herself a feminist
Pompous, overbearing, arrogant and insulting. And she shortly replies that she is not to be blackmailed. In short, to paraphrase another famous exchange, 'not at disposal'. The major newspapers have already spoken of nemesis. The Cavaliere put under by a woman much younger than him, Giorgia Meloni, who at 45 could be the first to lead a government in Italy: hard accounts with her father, after all, are part of her biography. On the opposite front, the [...]
Read now

Italian news
Maternity, PAS
Boldrini is wrong
In the name of bigenitoriality and ideological paritarianism, the PD parliamentarian proposes an amendment to Article 37 of the Constitution, which speaks of the relationship between mother and child as deserving 'special protection'. It would be a great 'constitutional' gift to the lobby of separated fathers supported in particular by the League. And it would increase the risks for mothers and children
Laura Boldrini announces her intention to immediately deposit in Parliament a series of proposals that she calls a 'rights package'. These include the idea of an amendment to Article 37 of the Constitution which states that 'A working woman has the same rights and, for equal work, the same pay as a worker. Working conditions must allow the fulfilment of her essential family function and ensure special adequate protection for the mother and child'. Boldrini's intent is [...]
Read now
1 2 3 ... 27 Next »