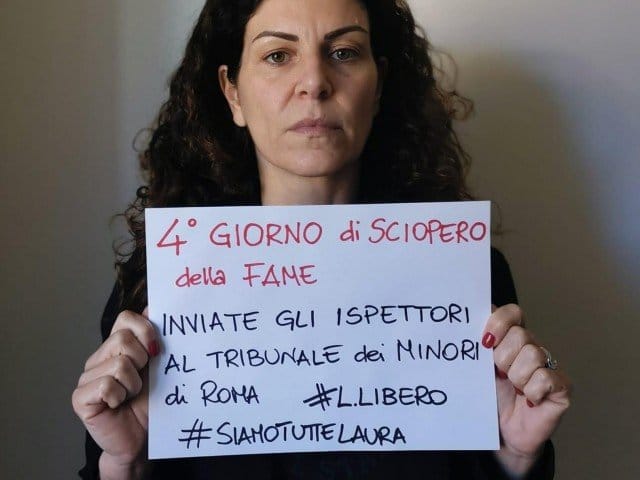 Laura Massaro's child is no longer hers

The Juvenile Court of Rome has ordered that mother and child be SEPARATED FOREVER. The woman, judged to be a 'hostile mother', has lost her parental responsibility and will no longer be able to see her son, who could be forcibly removed at any time to be placed in a foster home.
disposal parentaldecreelaura massaropassubtraction forcedcourt of minors by Rome
Please be aware that the translation of contents, although automatic, has a cost to Feminist Post but is provided to you without any charge. Please consider making a contribution via the "Support us" page if you intend to use our translation service intensively.
The contents of this site are translated using automatic translation systems without the intervention of professional translators.
Translations are provided for the sole purpose of facilitating reading by international visitors.
Share this article

A decree issued by the Juvenile Court of Rome has ordered the removal of Laura Massaro's son from his mother, which may take place in the next few hours in a forced manner and without notice.

We will still have the intolerable spectacle of a child being picked up by the police?

The decree provides for the forfeiture of parental responsibility for the woman, deemed a hostile motherand the termination of all relations with the child. The child will be placed in a family home. The Court of Appeal in January 2020 had ruled against the removal of the child from his mother, with which cohabiting since the age of two when the relationship between the parents ended.

The story of Laura Massaro and her son is an case symbol because it made it possible to uncover the "Pandora's box' of secondary victimisation suffered by many separated mothers in the civil and juvenile courts in Italy, adding fundamentally important elements to the one-way narrative that for twenty years has only mentioned 'separated fathers', as if mothers and children did not exist on the public horizon.

After the birth of the United Mothers' Committee against Institutional Violence, in September 2019 many mothers have taken courage to speak out about their experiences with vindictive, controlling, abusive, inadequate and often violent ex-husbands and partnersat a time when the principle of "the rule of law" was established in civil and juvenile courts.bigenitoriality'. or 'gender-neutral' parenting that effectively overcomes 'maternal preference' after the law on shared custody.

In the last twenty years in the branch of legal psychologywhich has a lot of space in technical office consultations for child custody, the theory of parental alienation (PAS) has taken hold changing name (symbiotic mother, malevolent mother, conflict of loyalties) but always arrives at the result of defining the inadequate mother, very often in situations that conceal violence.

The Court of Cassation recently ruled against PAS calling it a Nazi theory; but the mystification of PAS persists. The life of separated mothers and their children in civil and juvenile courts remains very difficult.

Italian news
Politics
Citizenship Income Reform: taking sexual difference into account
The employment situation and wage levels of women -with strong regional variability- are very different between women and men. This was also the case for income, which also had a positive effect on the birth rate. This is why changing the institution requires a careful assessment of the so-called 'gender impact': an 'equal' reform could have unequal effects according to gender
The need for a citizenship income reform is now recognised across the board, albeit with different approaches and solutions. The Meloni government has presented its plan in progress. But the consideration of what is called the 'gender impact' -that is, the evaluation of the effects of the reform on women- still seems insufficient, generally underestimated by analyses. In a social situation and in a labour market like the Italian one, where women are strongly disadvantaged both in [...]
Read now
1 2 3 ... 17 Next »