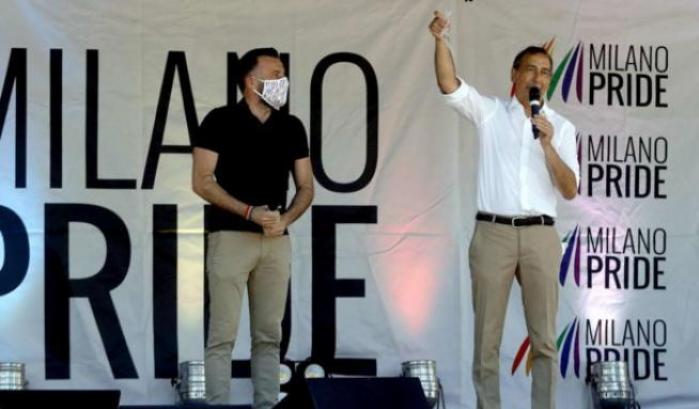 The mayor "nominates" Milan as a spearhead in the fight for the approval of the Zan ddl. Which confirms that it has at its heart the cancellation of sex and free choice of gender
beppe roomddl zanmilanprideself iduterus at rent
Please be aware that the translation of contents, although automatic, has a cost to Feminist Post but is provided to you without any charge. Please consider making a contribution via the "Support us" page if you intend to use our translation service intensively.
The contents of this site are translated using automatic translation systems without the intervention of professional translators.
Translations are provided for the sole purpose of facilitating reading by international visitors.
Share this article

Yesterday in Milan the most 'political' of Pride events: hence the 'shoulder', as has been said, for the approval of the Zan law. Here are some of the most significant things said from the stage at the event.

Alessandro Zan: "Those who criticise the law have never read it.. We cannot mediate on the living flesh of people. Taking away a piece of the law can have very serious repercussions. Removing gender identity means abandoning trans people. If it is removed, don't call it Zan law anymore.".

Monica Romanotranswoman: "No more judges, no more psychiatrists. Our struggle is intersectional or it will not be".

Guglielmo Giannottatransman: "We are against the trans business that denies self-determination to trans people. No more psychologists, psychiatrists, judges. I don't need anyone to live as a trans person. Law 164/82 -on rectification of civil status after sex change, ed.- is outdated and incomplete. In Lombardy we want to be the beacon, let's change the procedures at regional level. It should be an administrative procedure, as in many states.".

Both Monica Romano and Guglielmo Giannotta therefore confirm that gender identity is the real core of the Zan ddl, the first step towards gender self-certification or self-id.

Barbara Toncelli, transfeminist: "Trans women are women, perhaps even more than others. There is a extremist section of feminism which excludes them, mirroring patriarchal schemes".

We are the extremists.

Maria Elena Mantovani, Rainbow Families, requests registration on the birth certificate of the non-biological parent and "the free access to assisted reproduction techniques (PMA and surrogacy, ed.) for all, adoption and fostering, secular and inclusive schooling".

Another programme point, the decriminalisation of the use of surrogacy, is again confirmed.

Beppe SalaMayor of Milan, asks that the bill be approved without amendments and as soon as possible: "On the Zan bill, I think in a dry and pragmatic way. If there was time for discussion, we would discuss it. But those who don't want it just want to move it on. ITime is up. I say to my political party, let's go and count ourselves in Parliament, we run the risk of counting. The message coming out of Milan is: let's quickly approve the Zan".

Italian news
GPA, Maternity
Women-containers: pro-life and pro-utero for hire see eye to eye
For one and the other, the female body must make itself available to 'produce' the unborn child by renouncing the possibility of choice once pregnancy has begun. But a new life only really begins when there is a maternal yes: a fact that is unattainable and unattainable by law. Otherwise the only possibility is compulsion.
At least three things can be said about the bill filed by Maurizio Gasparri to amend Article 1 of the Civil Code and introduce into our legal system the recognition of the legal capacity of the conceived 'with the intention of preventing voluntary abortion in any form, whether legal or clandestine'. The first: it is highly unlikely that the bill will reach parliamentary halls. The immediate consequence of its approval would be the substantial inapplicability of law 194 because abortion would in fact be tantamount to murder. None of the majority forces [...]
Read now
1 2 3 ... 44 Next »