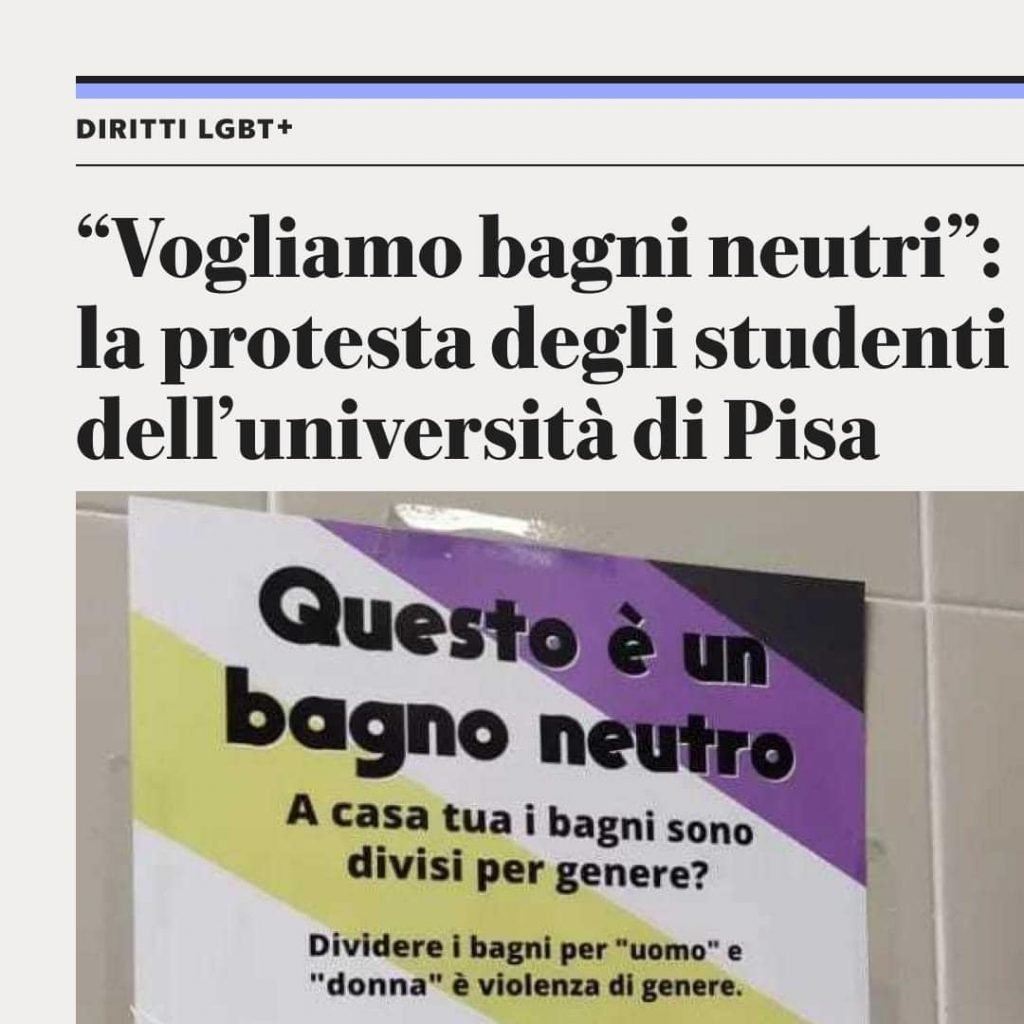 While in the UK there is growing impatience with the pressures of the LGBT lobby, in Italy we are in full trans peak: schools, universities, the mass media system, books for girls and boys. Gender identity is everywhere, as if self-identification were in force de facto. The latest case in the University of Pisa
bathrooms neutralcareer aliasidentity by genrepeak transschoolsself idtransgenderuniversity
Please be aware that the translation of contents, although automatic, has a cost to Feminist Post but is provided to you without any charge. Please consider making a contribution via the "Support us" page if you intend to use our translation service intensively.
The contents of this site are translated using automatic translation systems without the intervention of professional translators.
Translations are provided for the sole purpose of facilitating reading by international visitors.
Share this article

While in the UK the peak trans is behind us, and every day there are press reports about the growing intolerance of citizens, government and large private companies to pressure from the LGBT+ lobby and in particular the Stonewall Diversity Scheme (just the latest: hundreds of nurses and midwives calling on their organisations to break with 'inclusive' policies that allow men self-identified as women to be admitted to women's wards, and force new mothers to be defined as 'post-natal people', see here), provincially in Italy we are at the peak.

Three observations, before reporting on the case of theUniversity of Pisa.

1. The dispute is exclusively about women's bodies and the feminine symbolicno man is forced to call himself a 'person with a prostate', while using the word 'woman' is by definition considered violent and exclusionary.

2. It is the the left with no horizon to fill it with these proposals for inclusiveness in the skin of women

3. The 'battle of the toilets -and therefore the issue of human sexuality and the substitution of sex for gender is a matter for the absolutely serious, which can largely explain the Donald Trump's victory after years of 'inclusive' policies by President Barack Obama, and will largely explain the Joe Biden's non-improbable defeat in the 2022 midterm elections. It is precisely on these issues and on schools, as well as on the "critical race theory", the Democrats have already lost Virginia.

For several days now, the press has been reporting on the protest promoted by the 'Sinistra per...' group at the University of Pisa to demand neutral bathrooms. The national newspapers give the initiative a high profile, student flyers and the university's response, which is ready to meet the demand early next year.

It is disturbing to note that many articles, instead of reporting the facts in an informative tone, report exactly the language and tone of propaganda in favour of queer, trans and gender identity theories.

There are no traces of the criticism or protests raised worldwide by women and feminists about the attack on women's spaces implemented by queer/trans/gender activists in recent years, which impose a vision that denies sexual differences and that defines women's spaces as 'exclusionary.

The University of Pisa's bathrooms Professor Arturo Marzanodelegate for Gender Studies and Equal Opportunities, stating that "for single cabins the choice can be to remove any label, keeping only the generic one indicating the presence of the toilet. For collective cabins the option is to remove all symbols or to leave at least one "neutral" door between the various cabins.". Continue "would be a way of recognising obvious immondo a third gender exists". It is called a "Inclusive choice" in continuity with the choice to introduce the "alias career". (the possibility for students to have a university record book with a name and sex different from their birth), with eighteen requests already successful since 2007.

This position is not surprising: for a long time now, the equal opportunities' and 'gender studies' are colonised by queer, trans and LGBT theorists and activists, leaving less and less room for women and feminists, in a total silence of criticism and politics.

The opinions of women and girls, on neutral bathrooms as well as on the debate on sex and gender - not surprisingly full of ambiguity and communicative manipulation - were not forthcoming. In university circles the pressure on female students is very strong: female students are caught between the urge to support pseudo-progressive theories devoted to sexo-papism and the possibility of expressing themselves, with the risk of being accused of being bigoted, exclusionary or discriminatory. In schools and universities, girls are very afraid of being excluded and isolated from their peers and self-censor doubts and critical positions.

Beyond the propaganda, women's intolerance is increasing, but the climate of intimidation is still too strong in training and working places, which are still firmly in male hands, that still do not allow most women to express themselves in authority and freedom.

International news
Radical Feminism, Gender Identity
Femelliste, a gender critical 'sister' platform is born in France
Harassed, insulted, mocked, threatened: French feminists have collected and catalogued the attacks transactivists have suffered for years. And they have set up an information and training site against the dictatorship of transgender ideology
The name of the site is a play on words that cannot be translated into Italian. The site's creators inform that it has already been used by animal feminists such as Posie Parker, Nicole Roelens and the Boucherie Abolition collective. It would make one think of anti-specism, it is actually more and in some respects a little different. 'Femelle' in French means the female animal (for the human one, the same word as woman, femme, is used). Since they fight for sexual rights [...]
Read now
1 2 3 ... 47 Next »