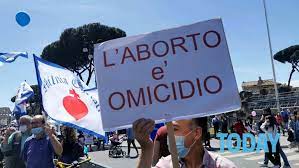 Abortion: precisely what do pro-lifers want?

Today in Rome the Demonstration for Life will once again shout no to abortion, pending the Supreme Court ruling that could make it illegal in the USA. But the abolition of law 194 is unthinkable, there is no majority that would support it. What is the question then? What are the real goals of the movement?
abortionlaw 194event for the lifepro-lifeSimone Pillon
Please be aware that the translation of contents, although automatic, has a cost to Feminist Post but is provided to you without any charge. Please consider making a contribution via the "Support us" page if you intend to use our translation service intensively.
The contents of this site are translated using automatic translation systems without the intervention of professional translators.
Translations are provided for the sole purpose of facilitating reading by international visitors.
Share this article

Today in Rome the Demonstration for Life. Notwithstanding the earthquake that is shaking the world of the so-called pro-lifers (a good account can be found at here), today's square is strongly underpinned by the US wind and the fact that within a few weeks the US Supreme Court may uphold the outlawing of the termination of pregnancy with a final ruling (we talked about it here).

With respect for everyone's opinions, The position of Italian pro-lifers is rather ambiguous: what exactly do they want?

That abortion no longer existed? Unthinkable, has existed since the dawn of time. If a woman does not want to carry a pregnancy, the only option to prevent her from having an abortion is the restraint bed.

They would like that law 194/78 regulating the termination of pregnancy in Italy be repealed? Also unthinkableas we have already seen, and as pro-lifers know only too well, there is no political majority who would support repeal, not least because the citizenry - as in the US - is in favour of keeping the law. Law which, true, is rather 'outdated' and poorly enforcedpublic healthcare tends to pass on the costs and hassles of the problem, women increasingly resort to the emergency contraception and to thechemical abortion more or less 'self-administered' (which mind you: it's no picnic) and in fact, with equal contraceptive coverage, the number of surgical Ivg's is steadily declining.

In any case repealing the 194 would not decrease the number of abortions, but it would certainly increase the number of women who die from themas it always was before the law guaranteed safe conditions. Is it thought that by making more women die, in a punitive logic, abortion would disappear?

Unable to realistically pursue the goal of repeal, pro-lifers do they intend to reform the 194? And if so, how?

Do pro-lifers really think that our record low birth rate can be traced back to the fact that abortion is legal in Italy (if practised in hospital or contracted facilities, otherwise not)? How can they think so?

Do they not rather see, as we do, that motherhood is under concentric attack: devalued, hindered by employers, with women having to postpone sine die because they are alone, do not enjoy the support of the 'village' that is supposed to help raise every creature that is born, are never the object of gratitude and admiration for their decision to give birth? Not to mention thetechnoscientific and transhuman attack, the parcelled-out procreative process, male envy that drives the search for wrest from women the 'privilege' (cis-privilege) of being able to give life, all the things we know.

Do they really think that if women were to be driven back into the underground to have abortions, more children would be born? What do pro-lifers intend to do, so that those who want to be mothers - not all of them do - can be mothers?

Finally: what do pro-lifers have to say about themale procreative irresponsibility? There are more men who do not want to become fathers than women who are reluctant to become mothers. A large number of abortions are explained by male rejection: when will we hear a word about this?

But there's more: the logic of equality and bigenitoriality now also prevalent in the Catholic world makes the role of mother and father equivalent and interchangeable, and contributes strongly to maternal devaluation and thus to denatality (to give an example, in the rare matrilineal enclaves that have survived in the world, as is the case with the Moso, where the figure of the mother is placed at the centre of the community, abortion does not exist)!.

Senator Simone Pillon, who will be among the protagonists of the Roman square today, recently re-presented his shared custody reform billwhich proposes equal time with the obligation to place the child with both parents and direct maintenance with theabolition of child allowance.

Does one really think that by attacking mothers even more heavily and participating in the growing misogyny, effectively helping to feed it as Pillon does, more children will be born? Is this the culture of life? Why is it not understood that the woman's 'yes' to the creature cannot be conditioned, surrogated or bypassed, and that the 'no' will always be more under these conditions?

In short: what do pro-lifers want?

International news
Gender Identity, Motherhood
UK: health service backs down on 'transgender maternity' services after midwives revolt
Fighting is needed: in Great Britain midwives and nurses are rebelling against the announced opening of courses and wards dedicated to the pregnancy and birth of 'trans and non-binary' people. And the NHS stops the initiative. Meanwhile, in the USA there is talk of uterus transplants between living people: donor women for the benefit of men who wish to have 'female physiological experiences'. The old patriarchal dream: to take the place of women. Today acted out by neo-patriarchs T
Fighting serves. The revolt of midwives and nurses has foiled the English National Health Service's (NHS) plan to organise dedicated 'transgender maternity' services. On 16 December, an advertisement had appeared to recruit staff to manage the training of 'trans and non-binary people giving birth' in 40 NHS maternity services, an announcement that provoked an immediate reaction from midwives. A group of around 300 nurses, midwives and psychologists wrote an open letter to Lizzie [...]
Read now
1 2 3 ... 17 Next »