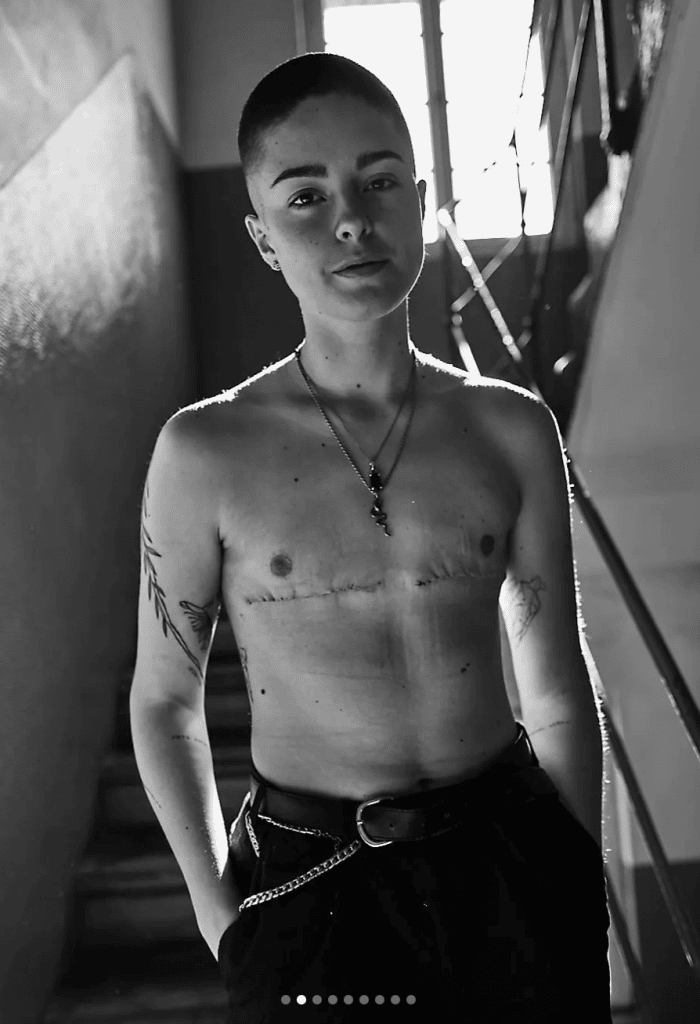 Transactivist propaganda invites girls uncomfortable with their female form to compress their breasts with special bands (binders), the first step towards the final mastectomy. The same misogynistic violence as the traditional 'breast ironing' practised in Africa. In the UK, the publicly funded charity Mermaids is under indictment for sending binders to teenage girls against parental advice.
bindingmastectomyMermaidspuberty blockerironing of breasttop surgerytransactivists
Please be aware that the translation of contents, although automatic, has a cost to Feminist Post but is provided to you without any charge. Please consider making a contribution via the "Support us" page if you intend to use our translation service intensively.
The contents of this site are translated using automatic translation systems without the intervention of professional translators.
Translations are provided for the sole purpose of facilitating reading by international visitors.
Share this article

Breast stretching (breast ironing) is a horrible practice still in use in some parts of Africa, particularly in the Cameroon. It is the destruction of the teats of teenage girls produced with red-hot instruments -old irons, spatulas, stones or shells- and generally practised by the adult women of the family. The purpose is rend less attractive girls to save them from rape and early pregnancies that could tarnish the honour of the family group. The practice causes serious damage to health of adolescent girls, from cysts to tumours. It is estimated that one in four girls in Cameroon undergoes the treatment, but in some regions, such as the Douala area, more than half of the teenage girls undergo the practice. In some cases, instead of ironing, a less bloody bandaging or dressing (binding).

Similar practices are spreading in the West, despite the fact that breast ironing is prosecuted as a crime and child abuse: from bandaging to total surgical removal (top surgery) to which an increasing number of girls are asking to be subjected. The binder is the step preceding the top surgery.

The British trans organisation Mermaids -a 'charity' for gender non-conforming children that has received £500,000 of public funding, is supported by Starbucks and Wagamama as well as Prince Harry and actress Emma Watson- is under investigation after he reportedly offered breast 'binders' to teenage girls against their parents' wishes.

La Charity Commission states that it 'has opened a regulatory compliance case. We have written to the administrators of Mermaids. We are now waiting for their reply.

According to The Telegraph, Mermaids offered a breast-flattening device to a 14-year-old girl whose mother had refused permission to swaddle.

A binder is a spandex corset that compresses the breasts together with the ribs and lungs. It's hard to breathe when you're wearing one, you feel dizzy, you have a headache and you shouldn't wear one during exercise: in fact, the trans advise schools to exempt girls who swaddle from sporting activities. I binder damage developing breast tissue, cause irritation, skin infections, muscle atrophy and even fractured ribs. Yet in the chat room of Mermaids one parent says she wants to buy one to ease her 11-year-old daughter's developmental anxiety.

According to The Telegraph Mermaids' online help centre also assures adolescents that puberty blockers are safe and 'totally reversible'. But the SSN, on its website states: 'Little is known about the long-term side effects of hormones or puberty blockers in children with gender dysphoria'.. It is rather known that the effects of blocker are to a large extent irreversible, which is precisely why it is abruptly curbing their use in the UK, the Great North of Europe, and Australia.

As we all know the moment when your breasts sprout is a delicate transition, You suddenly find yourself a sex object and struggle to take the measure of your new feminine corporeity. You hide, you curve, you often try to stop the process with ruinous weight loss. Now the trans-market offers you another way that is sold as progressive and courageous. You can have your breasts removed tout court, and you eliminate the problem: it is the next step to anorexia.

Just search #topsurgery on Instagram and find thousands of short-haired girls sporting bruises and scars, their nipples removed to be sewn back on or tattooed. Some pose with smiling surgeons beside them. One doctor photographs himself with jars of formaldehyde breast tissue. Another in Miami boasts of cutting 40 pairs of breasts a week or, to put it more casually, of 'delete the boobs'.

Most of these surgeries are performed in the United States, where breast removal is a colossal business and children's hospitals will perform mastectomies at the age of 13. No minimum age is required, says Los Angeles paediatrician Johanna Olson-Kennedy, because if a patient regrets it, she can always 'get breasts later'.

Autistic girls would make up one third of those seeking contact with gender clinics.

Binding e top surgery are misogynistic violence that wants to erase women. E should be outlawed such as breast ironing .

Transactivist propaganda must be stopped. Transactional hands off our girls.