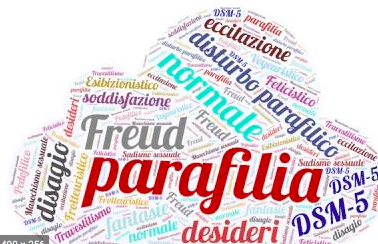 Paraphilias, the eroticization of death

The normalisation of sexual perversion and gender identity, sold as a defence of human rights, actually takes us far from our humanity, from relationships, from connection with others. It is a technological dystopia that kills our species. We must fight to choose life
identity by genreparaphiliassexsexualitytechnodystopiatranshumanism
Please be aware that the translation of contents, although automatic, has a cost to Feminist Post but is provided to you without any charge. Please consider making a contribution via the "Support us" page if you intend to use our translation service intensively.
The contents of this site are translated using automatic translation systems without the intervention of professional translators.
Translations are provided for the sole purpose of facilitating reading by international visitors.
Share this article

Equating paraphilias with healthy sexuality is very dangerous, and it is an equalisation that takes place under the umbrella of 'gender identity'.. It pretends to be a human rights movement, but in reality it is dehumanisation. This is no accident.

The 'gender identity', promoted by elites involved in the normalisation of the transsexualism and transhumanism, is part of a techno-medical complex using the network to promote their ideology.

The main factors normalising paraphilias are the internet, biophobia and, by extension, hatred of women. Internet, the the beating heart of the techno-dystopia into which we are sinking.It is changing our culture, our thoughts, our world and even the meaning of being human, and much faster than we can imagine. This apparatus is linked to the industries that have developed around the sexual objectification of women for profit.: pornography, prostitution, surrogacy, and now 'gender identity'. These industries are driving us much faster than we would need to oppose and resist.

The Internet is not an elaborate tool to allow us all to meet in one world coffee shop and converse. Internet was used by the military as an instrument of espionage and is now a vehicle for carrying state propaganda. in our homes, in our businesses and in our consciences. È used to control us.

The further we move away from who we are - organically, as parts of a living system - the more we are. the more we entrench ourselves in technology, the more we give up on our lives.. This is a process that consists, for example, of embracing the necrophilia, the first and last paraphilia, the one that eroticizes death rather than life, and of which all other paraphilias are offshoots. Increasingly, we opt for sexual objectification in place of the desire for relationships and bonds, we choose dead machinery in place of living entities, artificial intelligence in place of a living consciousness, and sex robots in place of flesh and blood women. We celebrate our progressive dissociation. We have become compulsively dependent on what is not humanfrom that which gives us nothing back.

Sexuality is a term for sexual attraction and orientation towards another person, whether of the same or opposite sex or both. It is based on connection, attraction, desire, reciprocity and carnality..

Paraphilias are something completely differentare often defined as perversions or psychosexual disordersin which sexual gratification is achieved through practices or fantasies involving a bizarre, deviant or very unusual source of sexual arousal (such as an animal or object) and which may prevent or compromise the ability to receive love or mutual affection.

The more we we move away from sexual attraction based on connection with others, based on embodiment, the more we insist that paraphilias should be socially normalised, as is the case in the current "gender identity" - or anti-reality movement - which constitutes a sexually dissociative and objectifying manifestation.

Sex and sexual attraction are deconstructed for profit, eugenics and social engineeringall of which were created to distance our evolution from life and integrate with the machines. These practices are fuelled by technologies that develop much faster than our ability to manage them and which are controlled by elites which, nourished by what capital can offer and driven by dependence, thrive on the ability to control people to satisfy their despair.

While the profit on women's skin and technological developments are advancing, intensified by a totalitarian market that feeds on human suffering, animal torture and the devastation of our planet, we lose control like drug addicts, heading towards a new world. a very long and dark night. We are possessed and cannot see the forest through the trees, and where all this dissociation is taking us.

Gender identity', the deconstruction of sex, the violation of the boundary between male and female with surgery and chemicals; to consider all this as treatment for people with gender dysphoria or as self-expression is to invest in the complete undermining of reality. Investing, that is, in the death spiral in which we find ourselves as a species. It is thethe ultimate expression of necrophilia, the eroticization of death. It is the religion of those who are leading us into the technological dystopia we are witnessing.

We need to look deeper at what is happening. We must struggle to choose life. We must consider paraphilias for which areAddictions born of disconnectionif we want to get out of this death spiral.

International news
Gender Identity, Motherhood
UK: health service backs down on 'transgender maternity' services after midwives revolt
Fighting is needed: in Great Britain midwives and nurses are rebelling against the announced opening of courses and wards dedicated to the pregnancy and birth of 'trans and non-binary' people. And the NHS stops the initiative. Meanwhile, in the USA there is talk of uterus transplants between living people: donor women for the benefit of men who wish to have 'female physiological experiences'. The old patriarchal dream: to take the place of women. Today acted out by neo-patriarchs T
Fighting serves. The revolt of midwives and nurses has foiled the English National Health Service's (NHS) plan to organise dedicated 'transgender maternity' services. On 16 December, an advertisement had appeared to recruit staff to manage the training of 'trans and non-binary people giving birth' in 40 NHS maternity services, an announcement that provoked an immediate reaction from midwives. A group of around 300 nurses, midwives and psychologists wrote an open letter to Lizzie [...]
Read now
1 2 3 ... 44 Next »