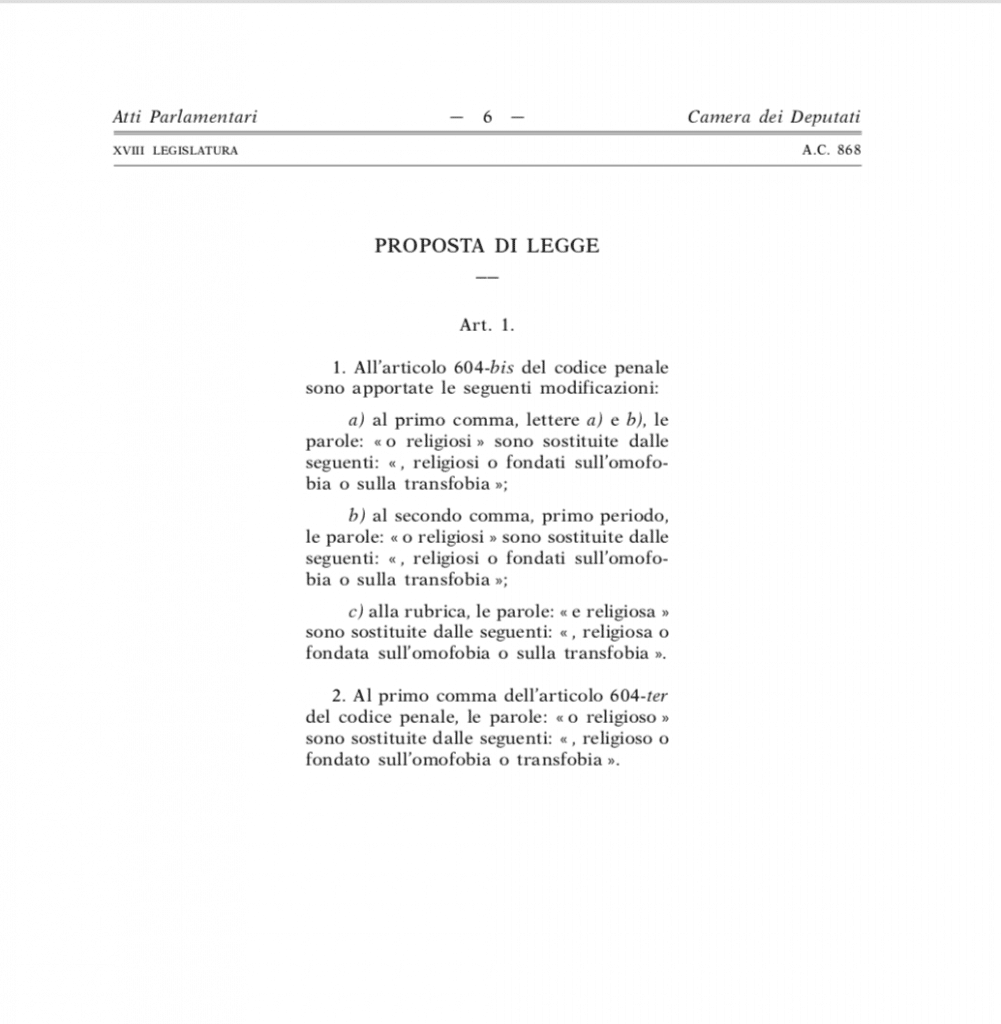 Zan bill: we are proud of us

Italia Viva's mediation proposal calls for a return to the Scalfarotto bill and corresponds to the demands of feminism. After a year of struggles and doors slammed in our faces, we have finally been heard and are at the centre of the debate.
ddl scalfarottoddl zanpharaohfeminismidentity by genreitaly vivahomotransphobiaPdrenzi
Please be aware that the translation of contents, although automatic, has a cost to Feminist Post but is provided to you without any charge. Please consider making a contribution via the "Support us" page if you intend to use our translation service intensively.
The contents of this site are translated using automatic translation systems without the intervention of professional translators.
Translations are provided for the sole purpose of facilitating reading by international visitors.
Share this article

Italia Viva is playing an active role in mediation on the Zan ddl and proposes that an agreement be reached on a modified text to "bringing Zan back into line with the definition contained in the Scalfarotto billi.e. by adding the words 'or based on homophobia or transphobia, in addition to the issue of disability, and revising the articles accordingly".

In short, away gender identity and away sex - which in the Zan bill extends protection to misogyny-misandry.

It is also requested to delete Article 4 - the so-called idea-saver which does not save ideas at all, and indeed consigns any legitimate opinion to thearbitrariness of the judgewhich alone is entitled to decide whether an expression of thought is or is not ".likely to lead to the concrete danger of the commission of discriminatory or violent acts".

Finally IV proposes the Amendment to Article 7 which introduces the celebration of LGBT day in schools and related training, requesting that the following be added to the textwhile respecting full school autonomy".

Italia Viva's proposals, presented in the Senate's Justice Committee, essentially coincide with the demands of feminism for change: away with gender identity, away with misogyny-misandry, free choice in schools. As you can see herewe have been the first, on 14 June, to indicate a return to the original Scalfarotto bill as a possible mediation route, proposal that we have taken up in this editorial of 28 June in La Stampa

and which we relaunched in a subsequent conference on 1 July in the Senate.

E' It is a source of great satisfaction that they have finally been heard. after a year of doors being slammed in their faces by the proponentsfrom Zan to Zingaretti and then Letta, and unfortunately also from the women of the PD, with a couple of exceptions, from Leu and 5Stelle, who ignored all requests for dialogue.

Apparently, albeit with our bare hands, we worked well, we managed to break the silence and open up public discussion, and today our proposal is at the heart of the political debate. All that remains is to wait for 6 July and the outcome of the mediation attempt.

On the part of the PD the closure seems absolute. At the moment the request is still going to count in the courtroom, but the next few hours could be decisive. After all it would be quite incomprehensible not to consider a text, that of the Scalfarotto bill, which was signed by Zan himself and by various representatives of the Democratic Party and the centre-left, and that it is likely that today could also be supported by part of the centre-right -not only from Forza Italia, but perhaps even from the League, finding the The majority needed for a rapid approval that would provide the country with a good law against homotransphobia -and disability-. Ed avoiding possible difficulties for the government, which would have to deal with a split at a very complex time.

He explains Pharaoh of IV: "Let's make a pact for returning to the Scalfarotto law against homophobia and transphobiawithout any terms that might give rise to doubts, and then cs a majority, we ask Draghi to put his confidence in the House.".

It would therefore be a matter of speeding up the approval of this rule.which has always been described as urgent, and of postpone to a later date a possible discussion on the highly sensitive issue of gender identity and the possible reform of law 164/82 regulating transsexuality, an issue that requires wide-ranging and in-depth reflection.

We wait with confidence. And also, if I may say so, with a certain pride.

ALL THE MORE REASON TO SUPPORT US!

Insights
Girls, Gender identity
I thought my son -4 years old- was trans: I was wrong
Lesbian mother and 'true believer' of the queer cult accompanies and authorises her child to identify as female. Until she realises she was wrong because of ideology. Weeping over her mistake today, she has embarked on a path of 'healing' together with him who has returned to calling himself male. An enlightening testimony
I was a true believer.I was a social justice activist before the social justice movement took over the world. I was at the forefront of introducing the concept of intersectionality in progressive organisations and convincing people to share their pronouns. My friends and I felt like the "cool" ones, the vanguard of a revolutionary work that would change the world, that would achieve what people within the social justice movement call "liberation [...]
Read now
1 2 3 ... 47 Next »