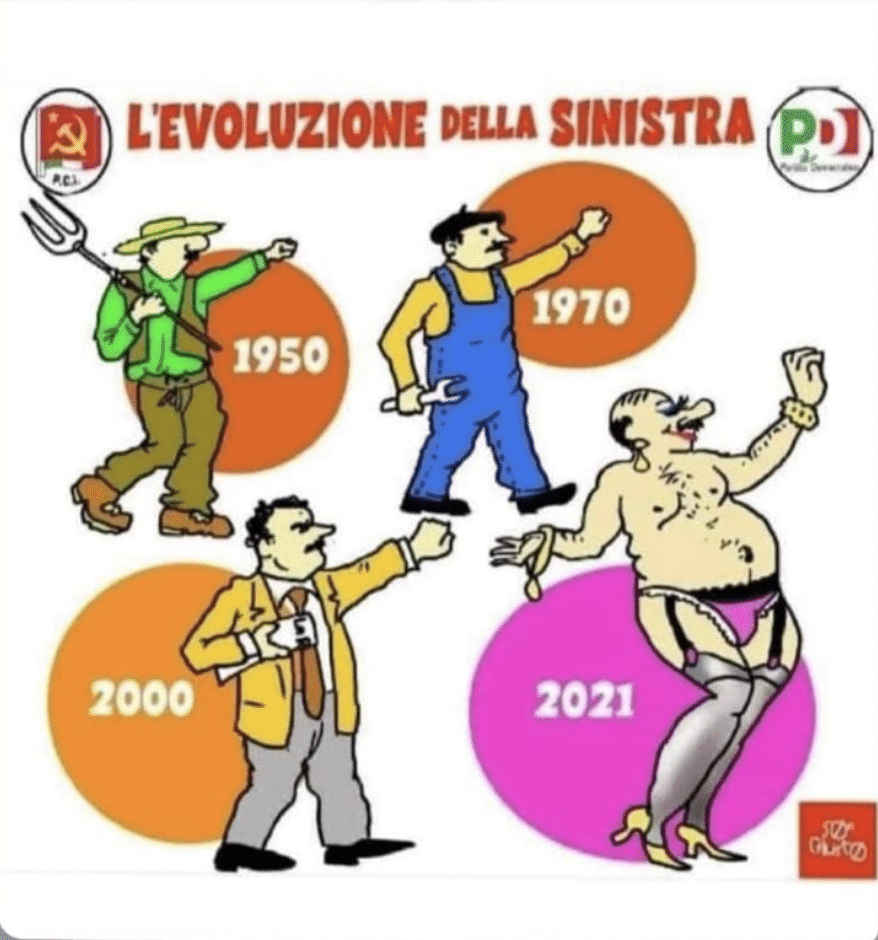 From historical materialism to post-human immaterialism: the new horizon of the Left

Gender identity takes the place of the soul and becomes the new opium of the peoples, distributed by progressivism that puts itself at the service of global trans-human corporations. Long live straightness and freedom!
identity by genrematerialism historicalmarketprogressiveslefttranshumanism
Please be aware that the translation of contents, although automatic, has a cost to Feminist Post but is provided to you without any charge. Please consider making a contribution via the "Support us" page if you intend to use our translation service intensively.
The contents of this site are translated using automatic translation systems without the intervention of professional translators.
Translations are provided for the sole purpose of facilitating reading by international visitors.
Share this article

It would be interesting if a historian - or better still, a historian - would apply himself to research and analyse the reasons why from historical materialism, the criterion for interpreting all that is real, the left has moved on to a veritable immaterialism post-human, the key to an obsessive politics of rights based on invisible and changing 'perceptions', surrogates for the soul whose denial has structured every form of real socialism.

The new opium of the people is gender identity, the mother of all perceptions, sedative doled out by the West's progressive formations, from Joe Biden to Enrico Letta. This issue will probably be of little interest to younger people who are free from this burden, but which is overwhelming so-called historical feminism, which has always been in an effective and stormy relationship with the left. Not having found any plan for dialogue, tenaciously pursued, with the left-wing promoters of the various Equality Act, Ley Trans or Ddl Zan as the case may be - the same thing everywhere - has been the result of a lack of understanding. ultimate cold showerwhich is bound to have major political consequences.

Since 1989 - but also before that - the left has been faced with the not insignificant problem of having to re-profile its horizon, definitively cleared of the Winter Palaces and any revolutionary prospects. But no one could have imagined that the outcome would be this, that From the masses we would move on to the atomised individual, from the revolution of the people to the revolt of the individual against his own flesh, an oppressive cage for that multicoloured substitute for the soul which has been given the name of gender identity.

To release this animula, the body must be denied and preferably tortured from an early age. A kind of symbolic cilice. E The value of relationships, which have always been the centre of gravity of feminine-rooted humanism, is downplayed to the benefit of the post-human individual who is not bound by anything, even from its own material substance, a perfect subject for any possible global market.

It remains to be understood, but a historian would really be needed here, why today the left has set itself the task of representing the motives and above all the budgets and dividends of the global multinationals of the post and trans-human- could perhaps be called post-market o trans-market- which profit from the annihilation of relationships, the mortification of human flesh, the ultimate control of sexuality and reproduction.

Do they know what they are doing?

Onward or single, to the rescue! Long live straightness and freedom!

Insights
Girls, Gender identity
I thought my son -4 years old- was trans: I was wrong
Lesbian mother and 'true believer' of the queer cult accompanies and authorises her child to identify as female. Until she realises she was wrong because of ideology. Weeping over her mistake today, she has embarked on a path of 'healing' together with him who has returned to calling himself male. An enlightening testimony
I was a true believer.I was a social justice activist before the social justice movement took over the world. I was at the forefront of introducing the concept of intersectionality in progressive organisations and convincing people to share their pronouns. My friends and I felt like the "cool" ones, the vanguard of a revolutionary work that would change the world, that would achieve what people within the social justice movement call "liberation [...]
Read now
1 2 3 ... 36 Next »