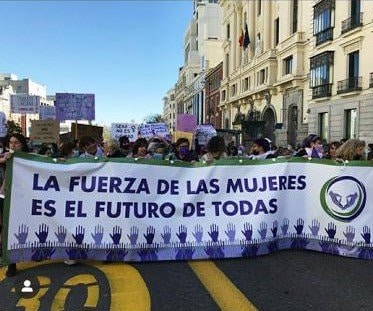 No to the Ley Trans. Stop pornography, prostitution, uterus for rent. Spanish feminism united in a huge demonstration to impose a political agenda free from transfeminist and queer intrusiveness, sending a signal to women all over Europe.
contra borradofeminism radicalfeminism radicalirene monteroley transevent feministspain
Please be aware that the translation of contents, although automatic, has a cost to Feminist Post but is provided to you without any charge. Please consider making a contribution via the "Support us" page if you intend to use our translation service intensively.
The contents of this site are translated using automatic translation systems without the intervention of professional translators.
Translations are provided for the sole purpose of facilitating reading by international visitors.
Share this article

2000 women according to government sources, 6000 participants gathered in Madrid from all corners of the Spanish peninsula and islands.

A meeting that surprised the feminists themselves, who wanted to make a strong statement: FEMINISTS ARE THERE.

We are not the minority.

A union that aimed to vindicate the main forms of oppression of women that feminism wants to eradicate from Spanish society:

-Imposition of the so-called 'trans law'

This time, as in many other demonstrations, rallies and statements to the media, the feminists of Spain have expressed their disagreement with Irene Montero, Equal Opportunities Minister, who has been pushing for the approval of the 'trans law' for years now. at central government level and for its validity in all Spanish autonomous communities. A push that has the appearance of animposition. Montero not only refuses confrontation, but has always shown itself unwilling even to listen or to read the position and reasons that historical Spanish feminists have been expressing for a couple of years now through the networks and the media.

Just last week at the PSOE congress the chief executive Pedro Sanchez promised a law to abolish prostitution. The protesters reproached him for not having kept its promise on other occasions. In 2018, he had already announced a law against sexual exploitation and trafficking, but the announcement was not followed up.

A part of feminism read this unexpected proposal as a way of silencing objections to the Ley Trans: a pact, an exchangean abolitionist law in exchange for a Lgbtq one.

The largest Spanish feminist groups and organisations joined forces and marched together.

The preparation of this national event took many months. Feminists from all over Spain organised themselves to reach Madrid with buses, trains, private transport. Social networks were the main means for the realisation of the event.

A demonstration of the fact that women do not let them intimidate by the violence and arrogance of the Lgbtq -now dominated by the queer current-. nor by the aggressiveness of the noisy 'transfeminist' movements, whose agendas do not include any point in favour of women, but rather promote their exploitation and erasure.

We were thrilled to see the Spanish sisters marching, shouting, smiling and hugging each other, setting an example to women in other countries who now feel less alone and are ready to oppose the abuses they experience daily in the name of tolerance.

What the Spanish sisters teach us is that:

Feminism is not divided, or struggling to women's liberation or not. Either you are a feminist or you are not.

The signs and most significant slogans and impact:

- Pornography is a school for rapists.

- The difference between a whoremonger and a rapist is money.

- Whoremonger, you pay to rape. Submission is not consent.

- Hormonising girls and boys is not a right.

- Neither cis nor trans. Femininity is not an identity.

- Commercialising the womb of a poor woman is a crime

- Safe spaces for women and girls.

- My vagina is not a working tool.

- If it causes psychological trauma and physical and psychic after-effects, it is not work.

- The man who rapes you will not ask you what gender you identify with.

- Women are not 'found dead', women are killed by men.

- I do not identify with the female gender that I was assigned at birth and this does not make me 'man' or 'gender fluid' or 'non-binary'. It makes me FEMINIST.

These and many others were the issues launched by feminists in Madrid, who demanded the realisation of their agenda.

Our Spanish sisters have taken a clear step forward, a wave that we hope will also reach Italy, releasing our anger and the desire to rebel together.

International news
Gender identity, Sport
Bye bye 'Lia': world stop to trans swimmers in women's races
Despite the scandalous and opportunistic silence of the sports media, the World Swimming Federation closes to male bodies in women's competitions (something similar has also been decided for cycling). Soon, hopefully, all other categories will follow. The trophy-stealing 'Lia' Thomas cases will not happen again. Honour to the female athletes who fought against this colossal injustice. And to all of us who have resisted the misogynistic violence of gender ideology for years.
Fighting is needed: piece by piece the wall of trans-ideology is crumbling. And while the American Democrats - Hillary Clinton's word - are resoundingly distancing themselves from trans-activism because they realise that they are risking the presidency of the United States on these issues, the Fina (Fédération Internationale de Natation), the world governing body of swimming, has voted in favour of new rules according to which transgender athletes will not be allowed to compete in elite women's competitions if they have crossed any part of the [...]
Read now
1 2 3 ... 27 Next »