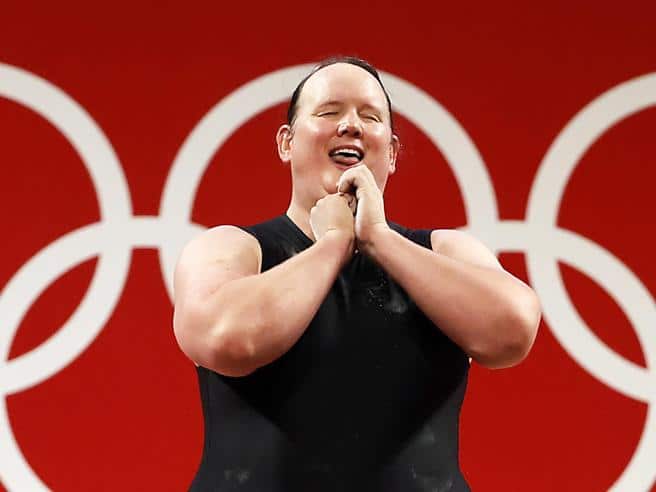 This defeat is, paradoxically, more useful to the cause of transhumanism than a victory would have been, since it will be used as proof that hormones are enough to make a male body 'equal' to a female body.
Laurel HubbardOlympics gamesave women's sportstokyotransgender
Please be aware that the translation of contents, although automatic, has a cost to Feminist Post but is provided to you without any charge. Please consider making a contribution via the "Support us" page if you intend to use our translation service intensively.
The contents of this site are translated using automatic translation systems without the intervention of professional translators.
Translations are provided for the sole purpose of facilitating reading by international visitors.
Share this article

Gavin 'Laurel' Hubbard, as predicted by Feminist Postwas eliminated in the women's Olympic weightlifting (+87 kg super heavyweight) final, after a failed attempt to lift 120 kg and two failed attempts at 125 kg in the snatch.

Curiously, this event was not broadcast live on RAI, despite being described as 'of historic significance' due to the presence 'the first openly transgender athlete to compete in an Olympic Games in a category of a different gender to that of his birth(see here).

Hubbard, in New Zealand's iconic all-black uniform, stepped onto the platform at the Tokyo International Forum and tremulously tried to lift the red weights, before immediately dropping them. With a smirk and a coy gesture, as if to say: 'It was too hard; I couldn't do it!', he waved to the audience and walked off the platform with a bow.

As if he had done it on purpose.

This defeat is, paradoxically, more useful to the cause of transhumanism than a victory would have been, since it will be used by bad-faith actors as proof that hormones are enough to make a male body 'equal' to a female body.

Ever since the IOC changed its guidelines in 2015 to allow men who say they feel like women to compete as women in the Olympics (and consequently influenced national and local sports federations around the world) sports medicine has had to waste time and resources to prove the obvious: the male body always has a major sporting advantage over the female body.

However, in consideration of irrefutable scientific evidence , the The IOC has recently announced its intention to revise its criticised guidelines on 'trans inclusion' at the Olympics., leaving it up to the individual sports federations to make their own rules (see here).

Yet we should talk not only about science, which is not in question despite widespread misrepresentation, but also about rights: the rights of women to participate in elite sporting competitions, with all the advantages that this brings in terms of career and income, and to fairness and safety.

Hubbard, who kept his powerful male body intact even after becoming 'Laurel', is now 43 aged and extremely out of shape for an elite athlete. He still should have tried to compete with other men. His encroachment on the women's category was not his 'right' but rather his privilege. He stole the opportunity from a woman, Roviel Detenamo from the Republic of Nauru, a small impoverished Pacific island that has already sent eight female weightlifters to the Olympics in the past (see here).

Hubbard's defeat further erodes women's rights and women's sport, deluding the world into thinking that at the end of the day 'trans people don't win' and paving the way for future trans-identified men in all women's competitions, not just niche ones like weightlifting.

Although the 13 female athletes in the weightlifting final beat Hubbard, his inclusion means all the women lost.

International news
Gender identity
SPAIN: SOCIALISTS AGAINST THE TRANS LEY
Unlike their Italian counterparts from the PD and the left who stand for free gender identity, the Spanish progressives break with the PSOE's transactivist policies in defence of women and children. In their manifesto the excellent arguments against what, if passed, could be the worst transactivist law in the world
Breaking with its party, the PSOE, and sending a signal to the women of the European left, who are generally aligned in defence of transactivist diktatism, the Federación de Mujeres Progresistas launches a courageous manifesto against the Trans Law wanted by the governing majority in Spain (PSOE and Podemos) and being approved by an emergency procedure, without an effective parliamentary debate or a wide public discussion. The initiative also comes in response to the clamorous break between historical Spanish feminism -united in the Contraborrado cartel- [...].
Read now
1 2 3 ... 30 Next »