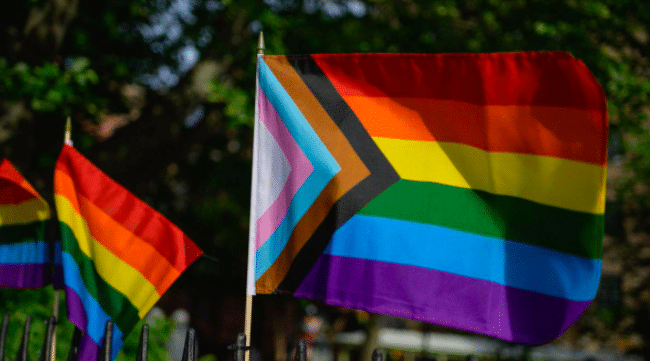 Stonewall backtracks and 'authorises' the use of the word mother

After losing agreements with some big companies, including the Health Service and the BBC - and therefore a lot of money - the UK's largest LGBT+ organisation moderately updates its guidelines for "inclusiveness": it will no longer be required to use terms like "pregnant person" or "person who has given birth" instead of mother. Change of course = no-bankruptcy
genreidentity by genreLgbtq+mothersmaternityStonewall
Please be aware that the translation of contents, although automatic, has a cost to Feminist Post but is provided to you without any charge. Please consider making a contribution via the "Support us" page if you intend to use our translation service intensively.
The contents of this site are translated using automatic translation systems without the intervention of professional translators.
Translations are provided for the sole purpose of facilitating reading by international visitors.
Share this article

Stonewall has abandoned legislation advising workplace equality organisations to remove the word "mother" by their lines of conduct.

The lobby announced that will no longer reward with higher ranking scores employers who would adopt gender-neutral alternatives and start using 'mother'..

Nancy Kelleythe chief executive of Stonewall, denied in an interview that such a course of action existed. "We are not interested in removing or deleting the word "mum". he said. Kelley, who has two adopted children with his wife, added: "I am a mum. I'm married to another mum. It's a deeply emotional term. And I would be really upset if my children didn't call me Mum."

"Our guide for the Workplace Equality Index should suggesting a range of different options to make the guide inclusive of all the different ways in which our families are formed" said the Stonewall official. "It is not necessary to remove terms such as 'mother'. to achieve this result.

The lobby is now under intense pressure after hundreds of documents have shown that its systems encouraged the organisations to rewrite their policies in exchange for points on the workplace equality index, index that claims to rank the most LGBT-friendly employers in the country.

La Dundee University has confirmed yesterday of replacing "mother" and "father" with gender-neutral alternatives after Stonewaal's negative feedback to his application for the index.

To explain the fact that the university scored only five out of 15 points in its guidelines, Stonewall wrote: "We recommend removing the terms mother and father from your guidelines.. . . we recommend using the gender neutrality in the guidelines'.

Stonewall explained that the feedback given to the university was outdated. "This is an old document," said one representative. "They are no longer the guidelines we provide." The university confirmed it had changed its terms after receiving advice from Stonewall.

An investigation by The Times of this year revealed that Stonewall suggested to the Central London Community Healthcare NHS Trust to "using terms such as 'pregnant employee' or 'birth parent' instead of mother".

Rhondda Cynon Taf County Councilin South Wales, told the index evaluators that they had changed all its Guidelines on maternity leave, adoption and surrogacy to "avoid gender pronouns".

The Scottish Government, at advice from Stonewall, has deleted the word 'mother by its lines of conduct.

Insights
Maternity
RU486 or abortion pill: myths, misunderstandings and business
Chemical abortion is sold as more free and self-determined, but it is not the solution for everyone: it is longer and more painful than surgery, sometimes less safe, and mostly serves to save the health system money, as the essay by three American feminists explains. Women must be guaranteed the right to be informed and to make an informed choice between the two options: here is a bill to make hospitals work
A few days ago we published 'When abortion matters to men'. In the post we mentioned the various methods of involuntary termination of pregnancy, including the abortion pill RU 486, also known as 'chemical abortion'. Chemical abortion is spoken of as a step forward in self-determination. Younger women in particular can get confused between 'morning-after' contraception (which must be taken within 72 hours of risky intercourse) and the abortion pill, with which pregnancy can be terminated up to the ninth week. [...]
Read now

Italian news
Policy
When abortion matters to men
Totally ignored by the right and left in peacetime, the issue of abortion becomes central when men fight for their power. But if there is a 'Marche case' there is also a 'Emilia case', a red region: the same percentages of objection and no abortion pill in the consultatories. We women must not take part in this filthy dispute over our flesh, siding with one or the other supporters.
Women - or rather, so-called 'women's rights' - have been instrumentally thrown into the centre of this horrific election campaign, probably the worst ever. Not the low female employment rate, the gender pay gap, the lack of services that forces us into the living welfare part, violence and feminicide, the machismo of politics and all that we know and experience. The issue of issues is abortion, fished out of the oblivion in which it is normally confined -no party [...]
Read now

International news
Policy
Elizabeth, the last matriarch
The missing queen wielded her power so skilfully that it was invisible. A profound influence that never backfired. Wisdom, an iron sense of duty, pragmatism, emotional control and no narcissism: these are the traits of sovereignty that make her a model of female authority
Gaby Hinsliff for The Guardian Stop all watches. Unplug the phone. For once, the opening lines of WH Auden's poem, Funeral Blues, seem appropriate to the moment. Like it or not, much of public life will come to a halt in the days of mourning as broadcasters suspend their programmes and a state funeral is prepared. However long it may have been predicted, the death of the longest reigning monarch in British history is a moment [...]
Read now
1 2 3 ... 44 Next »