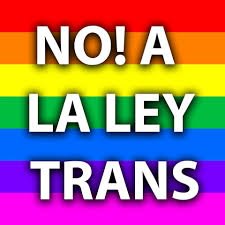 Spain: Ley Trans divides the country and splits the government, Psoe against Podemos. And feminism opposes. Here is the text of the Spanish law. And that of the Italian proposal already ready

contra borradofeministsirene monteroitalylaw transley transmovement idemntity transpodemospsoeself idspain
Please be aware that the translation of contents, although automatic, has a cost to Feminist Post but is provided to you without any charge. Please consider making a contribution via the "Support us" page if you intend to use our translation service intensively.
The contents of this site are translated using automatic translation systems without the intervention of professional translators.
Translations are provided for the sole purpose of facilitating reading by international visitors.
Share this article

For your information, here is the entire text of the so-called Ley Trans, which is currently being discussed in Spain.with a rift also in the government majorityon the one hand the proponents of Podemos, led by the Minister of Igualdad Irene Montero and deaf to every objection, on the other hand the Psoe opposing noting many critical issues. Together with the text of the proposed law we publish the timely and reasoned objections of the Contra Borrado feminists (almost 150 associations tenaciously opposing it) and their counter-proposal.

The texts are too long to be sent in translation, but are also easily understandable for those interested in following the issue in detail.

The new Spanish bill provides for self-determination (self-id) of one's gender identity over the age of 16 without the need for certificates attesting to gender dysphoria or the need for "changes in the person's appearance or body functions through medical, surgical or other procedures". The draft law provides for "the free declaration of the person concerned is sufficient"It also recognises non-binary identities, admitting that people who do not identify themselves as a man or a woman are not allowed to identify themselves as a man or a woman. may also not indicate their gender on their identity card.

At the bottom of the two Spanish documents - Podemos' bill and Contra Borrado's opposition - you will also find the Italian bill of the same tenor proposed by the Trans Identity Movement.

La Zan law against homobi-transphobia currently only approved in the House is the antechamber to an Italian trans law, keeping the concept of free gender identity at the centre.

Finally, there is the very important fact that in the UK, the home of transactivism, self-id has been definitively rejected by the government. and was free gender identity propaganda stopped in schools. At self-id, according to a survey published by The Times96% of the British people oppose it. There is no reason to think that Spaniards and Italians view it more favourably.

So Spain, and eventually Italy, risk importing a product that has already expired and has been rejected by its creator..

DRAFT OF THE SPANISH TRANS LAW

the whole text can be found here

the whole text can be found here

THE TRANS BILL IN ITALY

Guaranteeing the full effectiveness of the right to gender identity and gender expressionPlanning points for a proposal to reform Law 164/1982 - "Rules on the rectification of sex attribution "By MIT -Movimento Identità Trans Settore Sportello Legale-13 February 2020.

As you will see The guiding principles overlap with those of the Trans Law: total freedom to decide which gender one belongs to, regardless of biological sex, of any pharmacological and/or surgical treatment, and without any need for medical diagnosis, expertise or intervention by the courts.

The text can be found here

Insights
Girls, Gender identity
I thought my son -4 years old- was trans: I was wrong
Lesbian mother and 'true believer' of the queer cult accompanies and authorises her child to identify as female. Until she realises she was wrong because of ideology. Weeping over her mistake today, she has embarked on a path of 'healing' together with him who has returned to calling himself male. An enlightening testimony
I was a true believer.I was a social justice activist before the social justice movement took over the world. I was at the forefront of introducing the concept of intersectionality in progressive organisations and convincing people to share their pronouns. My friends and I felt like the "cool" ones, the vanguard of a revolutionary work that would change the world, that would achieve what people within the social justice movement call "liberation [...]
Read now
1 2 3 ... 32 Next »