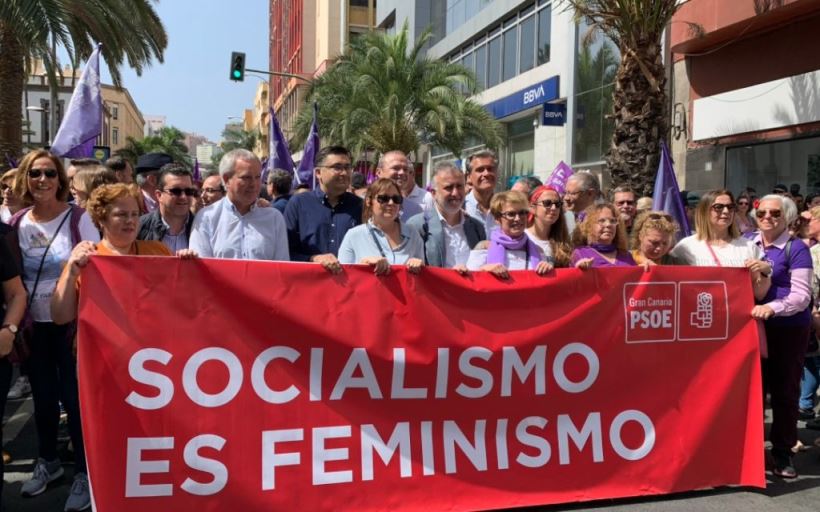 Spain: Psoe feminists put obstacles in the path of the Trans Law

After the recent about-turn by the Spanish socialists, who had come out in favour of the Trans Law, the party's feminists are reopening the debate, proposing amendments against gender identity for the next Federal Congress. These have met with grassroots approval, while the leadership is currently silent.
Carmen Calvocongress Federalddl zanfeminismidentity by genreirene monteroley transpedro sanchezpodemospsoeself id
Please be aware that the translation of contents, although automatic, has a cost to Feminist Post but is provided to you without any charge. Please consider making a contribution via the "Support us" page if you intend to use our translation service intensively.
The contents of this site are translated using automatic translation systems without the intervention of professional translators.
Translations are provided for the sole purpose of facilitating reading by international visitors.
Share this article

The PSOE feminist collective presented the 40th Federal Party Congress amendments to certain points in the programme that would violate equality policies.

In particular, the aim is to avoid "the introduction of formulations that imply setbacks for equality policies". and therefore for "guaranteeing women's recognised rights"..

"The substitution of sex for gender'. explain the petitioners "prevents a proper analysis of social, economic and political reality in the face of inequalities'. in addition to "jeopardising the necessary breakdown of data by sex". and to harm the " spaces reserved for women".

It is also stated that it is necessary to edit the name of the entry 'Mainstreaming to ensure gender equality'. at "Mainstreaming to ensure equality between women and men".. It is also asked to replace the concept of 'trans' with that of "transsexual'.explaining that the term trans does not enjoy any "legal recognition or validity, as an umbrella term encompassing different realities, from transsexuality to behaviour defined as transformism" . The feminist collective demands a 'scrupulous' presentation of the terms.

The amendments also include the deletion of the '+' symbol within the LGTBI + acronym because, they explain "è legally unstable, indefinite and imprecise, which generates legal uncertainty" . The promoters state that they intend to Defending the clear separation between feminist claims and those of the LGTBI collectives.

Significant fact, The amendments have already won majority support wherever they have been tabled at local body level and enjoy growing support among the Psoe base, while the leadership is currently silent. The amendments need to be approved by the delegates so that they can finally be incorporated into the final text.

As you will recall, the Vice-President of the Council, the Socialist Carmen Calvo, had long opposed the discussion of the Ley Trans, supported by Equality Minister Irene Montero (Podemos). But in the end the Psoe had also capitulated in the face of transactivist demands for free gender identity or self-id (see here).

Radfem Italy discussed it in a public meeting with Ángeles Álvarézcartel contact person ContraBorrado and one of the best known representatives of Spanish radical feminism, analysing the similarities between the text of the Ley Trans and the Zan bill: here the video of the meeting.

If the Psoe body will support, as it seems, the amendments proposed by the party's feminists, the Federal Congress and the leadership will not be able to ignore this, and Ley Trans will encounter new obstacles on its way.

Insights
Girls, Gender identity
The debate on puberty blockers also opens in Italy - finally!
Breaking the silence is the Italian Psychoanalytic Society, which is calling for an open scientific debate on these treatments, which it defines as 'experimental', not supported by adequate studies and at great ethical risk because they predetermine the fate of girls and boys
Much later than in the Great North of Europe, Great Britain, Australia, and some US states - which have abruptly put the brakes on the use of puberty blockers as a 'therapy' for girls and boys with gender non-conforming behaviour - Italy too is finally breaking its silence with a letter addressed to the government by the Italian Psychoanalytic Society, which calls for caution and the opening of a public scientific discussion. Below we reproduce interviews conducted by Marina Terragni for Il Foglio and [...].
Read now
1 2 3 ... 48 Next »