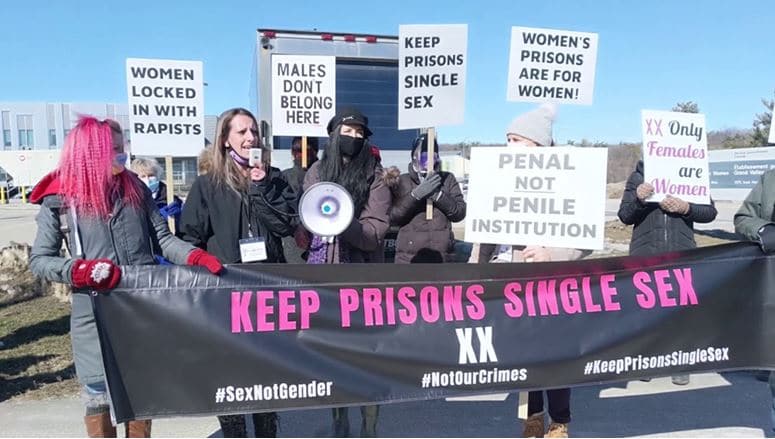 Self-ID and the prison system: men in women's prisons. A report from Canada

self-certification by genreprisons femalecaWsbarHeather Masonself-idviolence sexualWe The Females
Please be aware that the translation of contents, although automatic, has a cost to Feminist Post but is provided to you without any charge. Please consider making a contribution via the "Support us" page if you intend to use our translation service intensively.
The contents of this site are translated using automatic translation systems without the intervention of professional translators.
Translations are provided for the sole purpose of facilitating reading by international visitors.
Share this article

An Irish newspaper, TheJournal.ie, reports today la news of a woman arrested in Dublin for possession of violent child pornography images. Only at the end of the article it says, almost incidentally, that it is a man who identifies himself as a woman. In countries that allow the self-id -the self-certification of gender- if a prisoner claims to be a woman they can be transferred to a women's prison. This involves very serious risks for the safety and dignity of female prisoners. This is what happens in Canada, where, since 2017, a law has authorised self-id.

On 7 March, a group of Canadian women gathered outside the Grand Valley Institution for Women, a women's prison in Ontario, to protest against the transfer of male prisoners who claim to feel like women.

Transfers of men to women's prisons happen regularly in Canadain the general silence since the entry into force in 2017 of the gender identity' law which allows you to change gender with a simple self-declaration (self-id). It means that a male prisoner can declare himself a woman, without any medical diagnosis or intervention, and ask to be transferred to a women's prison. Most of them have committed homicides and sexual offences, and leaves a much quieter home and community circuit than the women's institution.

Of the 14 male prisoners transferred that we know of, 12 have not had surgery or taken female sex hormones.

The main voice in the defence of incarcerated women is Heather Mason. A former prisoner herself, Heather has seen the damage this policy does to vulnerable women, who have often already suffered a life of physical and sexual violence, poverty and alienation.

"We have fully discharged the risk of violence between inmates in male prisons on women", he said in his speech. "We are used as shields to protect men who self-identify as women from the violence of other men'.

Mason is speaking at her own personal risk (considering the nature of those she is trying to restrict - criminals and gender activists), and without the support of institutions that have historically fought for incarcerated women caught up in the ideology of 'gender identity'. The Canadian press is almost completely silent on this issue and reports on trans people only from a positive point of view. Since the federal prison agency, Correctional Services Canada, does not provide information on male prisoners transferring, Mason relies on a network of women, inside and outside prison, and ingenious detective work to find these men and what they have done.

Thanks to Mason's investigations, we learned that some of the most obvious risks of placing dangerous male prisoners with vulnerable women had already been realised: sexual and physical violence, pregnancy and sexually transmitted diseases. Women felt the need to arm themselves with makeshift means, such as cans of soup hidden in their socks.

There are also less obvious but equally unfair consequences for women, such as the re-traumatisation of victims of abuse, rivalries because of the added sexual element of being with an intact male, the loss of dignity and privacy that women retain when in monosexual spaces, etc. Services such as Mother and Child Programwhich humanely allows the child to stay with its mother, are at risk of being cancelled due to increased security measures necessary to supervise violent male criminals. Counselling services offered to women as rehabilitation are useless for male prisoners, who have different behaviour patterns (despite their supposed 'gender identity'), as evidenced by the crimes they have committed.

Female guards also are forced to deal with these men who identify themselves as women, for example during searches, and feel that their safety and dignity are being compromised. In fact, their union wants to arm the guards in the women's prison with more powerful guns and riot gear. This increase in the level of security is a direct result of the influx of dangerous male prisoners, and will have a negative effect on the female prison population.

The Correctional Services Canada accepted all this in the name of human rights and fairness to men. It is certainly not fair to the women who have to endure these unjust conditions in their captivity. Their human rights do not count in this equation. For women who identify themselves as men, no transfer to a male prison is allowed. The possibility of them being raped is too high.

The protest was organised by two groups created 'from below' to fight for women's rights in Canada, caWsbar (Canadian Women's Sex-based Rights) and We The Females. Ex-convicts and guards also joined the demonstration. Although media coverage was poor (e.g. here), there were no interruptions from gender activists, and many passers-by showed their support. After the success of the first protest at the GVI, the women held a second one on 20 March: the number of protesters increased, it was animated by songs and a group of crossing guards stopped and joined the women. We can only hope that the tide is turning for some of Canada's most marginalised women, made victims again by the prison system.

Insights
Girls, Gender identity
The debate on puberty blockers also opens in Italy - finally!
Breaking the silence is the Italian Psychoanalytic Society, which is calling for an open scientific debate on these treatments, which it defines as 'experimental', not supported by adequate studies and at great ethical risk because they predetermine the fate of girls and boys
Much later than in the Great North of Europe, Great Britain, Australia, and some US states - which have abruptly put the brakes on the use of puberty blockers as a 'therapy' for girls and boys with gender non-conforming behaviour - Italy too is finally breaking its silence with a letter addressed to the government by the Italian Psychoanalytic Society, which calls for caution and the opening of a public scientific discussion. Below we reproduce interviews conducted by Marina Terragni for Il Foglio and [...].
Read now
1 2 3 ... 41 Next »