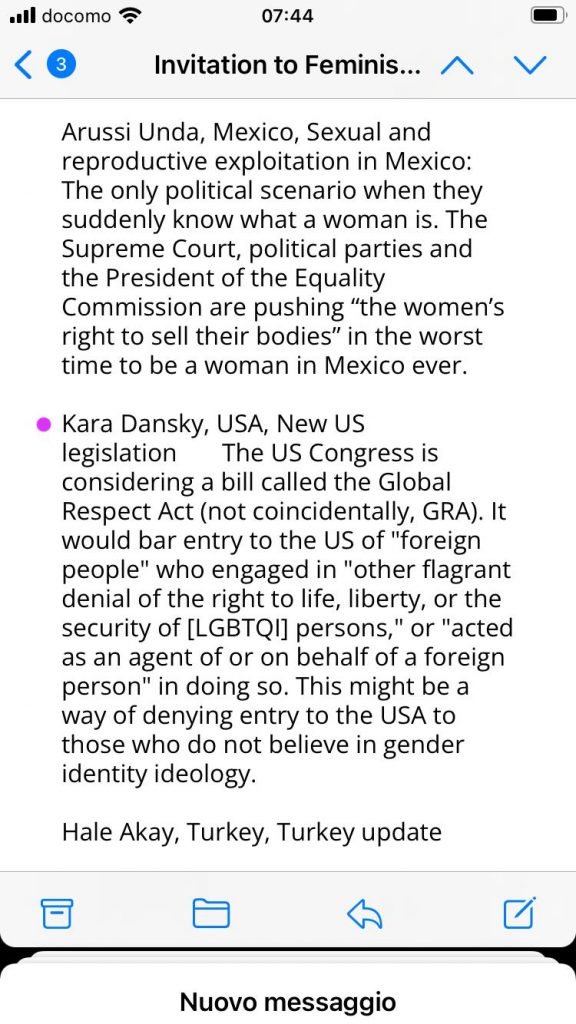 Are you gender critical? You don't get in the USA

The Global Respect Act, a bill being considered by the US Congress, would ban entry visas for anyone who has been responsible for discriminatory acts against LGBT people, or who has induced such acts in third parties. It is enough, therefore, not to adhere to the gender ideology and to think - as we do - that sex is real to no longer be able to enter the United States.
congressfeminismgender ideologyglobal respect actidentity by genretransgenderUSAwoke
Please be aware that the translation of contents, although automatic, has a cost to Feminist Post but is provided to you without any charge. Please consider making a contribution via the "Support us" page if you intend to use our translation service intensively.
The contents of this site are translated using automatic translation systems without the intervention of professional translators.
Translations are provided for the sole purpose of facilitating reading by international visitors.
Share this article

A world gone mad. In the East a brutal dictator invades a neighbouring country, in the West, ideological drift produces monsters.

If with the Scottish super self-id novelty we thought we had reached the top of gender ideology -a request to be able to intervening in the birth certificate to change the sex at will original, hiding it for good, and to be able to say that you were born a woman even though you are a man to all intents and purposes - well, we were wrong.

In the USA they have gone further.

A proposal submitted to Congress asks for banning from entering America anyone who has denied 'the right to life, liberty or security of LGBT people' or instigated such actions or acted in this way on behalf of third parties.

In essence, he comments Kara Dansky of WDI USA, anyone who does not support gender ideology should no longer be allowed to enter the United States, starting of course with the gender critical feminists.

In fact, gender criticism is already woke an aggressive act in itself.

To say that sex and bodies are real, that a man who claims to be a woman cannot participate in women's sports competitions, or cannot be accommodated in women's prisons, or cannot access the refuge houses intended for battered women - something we say every day with determination - can be considered as discrimination against LGBT people, therefore an act that denies 'the right to life, liberty or security of LGBT people' or could incite violent and discriminatory actions.

After all, the dead ddl Zan (Art. 4(1)) threateningly stated that "the free expression of convictions or opinions as well as legitimate conduct relating to pluralism of ideas or freedom of choice were not affected, provided that they are not likely to give rise to a real danger of discriminatory or violent acts being committed".

In that 'provided' was the whole spirit of the new American bill.

So if the Global Respect Act - that's what it's called - becomes law, bye bye USA!

No more entry visas for us feminists.

Insights
Girls, Gender identity
The debate on puberty blockers also opens in Italy - finally!
Breaking the silence is the Italian Psychoanalytic Society, which is calling for an open scientific debate on these treatments, which it defines as 'experimental', not supported by adequate studies and at great ethical risk because they predetermine the fate of girls and boys
Much later than in the Great North of Europe, Great Britain, Australia, and some US states - which have abruptly put the brakes on the use of puberty blockers as a 'therapy' for girls and boys with gender non-conforming behaviour - Italy too is finally breaking its silence with a letter addressed to the government by the Italian Psychoanalytic Society, which calls for caution and the opening of a public scientific discussion. Below we reproduce interviews conducted by Marina Terragni for Il Foglio and [...].
Read now
1 2 3 ... 51 Next »