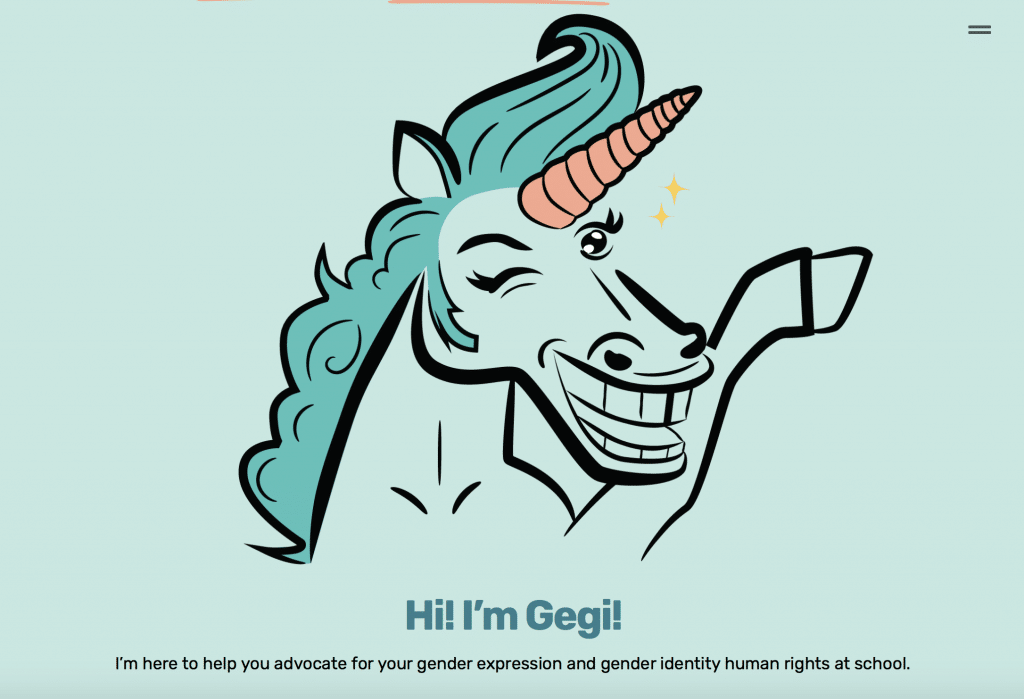 The magical horse loved by the youngest children hired by trans-propaganda to teach self-id in Canadian schools, even against the wishes of parents. Aliased identity already being promoted in Italian schools too
canadacareer aliasidentity by genrePrinciples by Yogyakartaproject Gegischools
Please be aware that the translation of contents, although automatic, has a cost to Feminist Post but is provided to you without any charge. Please consider making a contribution via the "Support us" page if you intend to use our translation service intensively.
The contents of this site are translated using automatic translation systems without the intervention of professional translators.
Translations are provided for the sole purpose of facilitating reading by international visitors.
Share this article

Since the publication of the so-called Principles of Yogyakarta, Queer activists have worked hard to incorporate the quasi-religious concept of 'gender identity' into every aspect of society, including schools. Typically confident and open, and very interested in social inclusion, children and adolescents are easy targets. In United Kingdomthe organisation Mermaids had great success in the promotion of gender identity in schoolsat least until the judgment Keira Bell made the public aware of the dangers of medicalising gender dysphoria.

In Canada, supporters of gender identity have been more stealthy. For a long time parents were largely unaware that many teachers were encouraging their daughters and sons to believe that sex is not real, that it is possible to change genderand that children are not 'safe' if their gender identity is not 'affirmed'. School boards have delegated teaching about 'gender' to outside staff and all levels of Canadian government (federal, provincial and municipal) have used taxpayers' money to fund them. The indoctrination of gender identity through the school system has been so successful that in all Canadian schools pre-pubescent children demand that their so-called 'preferred pronouns' be used, and many teenagers call themselves 'pansexuals'.. Rebellion against traditional society is now a ridiculous idea: the only rebels are those who accept scientific reality.

Recently (on 5 May 2021), gender activists from two Canadian universities launched the Gegi project: gegi.ca, a website (see here) which describes itself as an 'online knowledge mobilisation centre'. The Gegi project does not only aim to teaching children (from kindergarten to seventh grade) that sex does not existbut wants to give them the tools "normally possessed only by legal professionals" to change their school regulations in the name of "affirming their gender identity". The site contains a list of all schools in Ontario with the school board's position on gender identity. For example, boys who say they have a female identity can check on the list if their school board allows them to use the girls' toilets, and if not, the site gives advice.

Gegi wants to "meet you". In fact, Gegi would like the children's email addresses. On one page - removed after public outcry before the site was launched - Gegi encouraged children to do what they have always been taught not to do: sharing personal information online.

The name 'Gegi' is theacronym for Gender Expression Gender Identity ("gender expression, gender identity'). But many have not missed another meaning: the online dictionaries of the urban slang (e.g. here) consider it to be a ugly and insulting synonym of vulva, strangely enough. Perhaps less strangely, many did not believe it was a coincidence.

People started complaining on social media, renaming the unicorn 'Groomi' (referring to the groomingi.e. preparing a child to be sexually exploited) and questioning the website's intentions regarding the protection of children. They were all subsequently blocked.

An explanatory webinar on the Gegi project was planned for interested adults, but was cancelled. Now Gegi invites questions via the contact form on the website for anyone with a school-only e-mail address (i.e.: no parents allowed).

Questions about girls' rights to safety, dignity and privacy in schools are highly unlikely to be answered. Gender-based rights are protected by the Canadian Charter of Rights and Freedoms which is part of the Constitution of Canada, but this seems to be irrelevant to the interpretation of Gegi's law.

Incidentally, Religious rights are also irrelevant to Gegi, also protected by the Charter, in a multi-ethnic country like Canada, where support for pluralism and religious freedom is an important part of the political culture. Even Catholic schools, which receive funding from taxpayers, are in the crosshairs of gender identity activists. Many have already started to allow boys and men into the toilets and changing rooms of their choice: the women's ones.

Canadian schools have been giving children a deep indoctrination into gender ideology for longer than most parents realise, and the Gegi project is clearly the next move: manipulating children to create litigation. Canadian gender activists have decided that it is time to mobilising an army of children to break down any remaining barriers based on gender. Every Canadian concerned about child protection, women's rights and even religious freedom has been taken aback by these so-called 'inclusivity' policies. Under the guise of anti-bullying, acceptance of sexual orientation and kindness towards others (all of which are extremely worthy objectives), hides a threatening and dangerous agenda for the sexual rights of men, which promises even the most marginalised child that they can become 'a unicorn' if they adopt a gender identity, and tries to teach them that adults who encourage it are more trustworthy than their parents.

Gegi is a real Pied Piper of Hamelin, and we must not be reassured by the lies of activists and trust them.