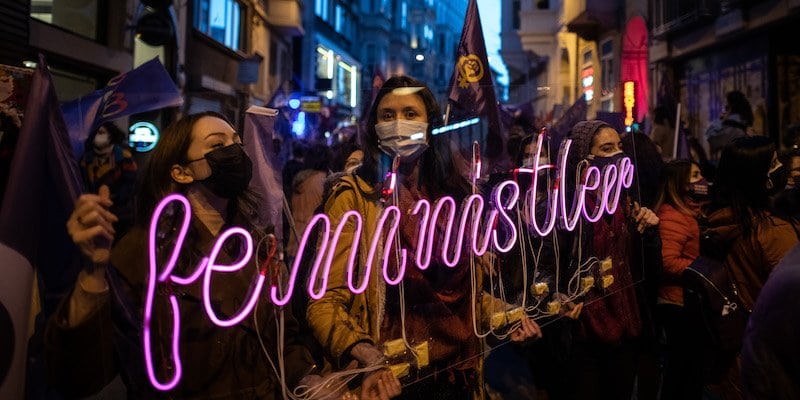 Turkey withdraws from the Istanbul Convention against male violence. For women, a huge blow

convention by istanbulgenreidentity by genrelaw zanLgbtqRecep Tayyip Erdoğanturkey
Please be aware that the translation of contents, although automatic, has a cost to Feminist Post but is provided to you without any charge. Please consider making a contribution via the "Support us" page if you intend to use our translation service intensively.
The contents of this site are translated using automatic translation systems without the intervention of professional translators.
Translations are provided for the sole purpose of facilitating reading by international visitors.
Share this article

Turkey abandons the Council of Europe Convention on preventing and combating violence against women and domestic violenceknown as Istanbul Convention and ratified for the first time (2011) in that country.

A huge blow for Turkish towns: almost every day in 2020 a woman died at the hands of a mannot counting the 170 suspicious deaths. Same pace in the first 65 days of 2021, around 70 feminicides. According to the World Health Organisation at least 40% of Turkish women are victims of partner violence compared to a European average of 25%. Turkey also holds the record of women journalists in prison. Misogynistic violence in Turkey is therefore a major issue.

The abandonment of the Convention, which has been signed by 34 European nations and is an indispensable tool in the fight against male violence, was announced with a decree-gulp of the President Recep Tayyip Erdoğan welcomed by the Conservative government, which believes that the dangerous the treaty for having introduced the "principle of 'gender' equality, but also by promoting homosexuality.introducing non-discrimination on the basis of sexual orientation"(Reuters).

For the ruling party (Akp) the Convention It would damage family unity and encourage divorce, as well as include references that can be exploited by the LGBT community. According to the Associated Press note, those attacking the Convention claim that "The treaty promotes homosexuality through the use of categories such as 'gender', 'sexual orientation' and 'gender identity'. that pose a threat to Turkish families'..

The meaning of the Istanbul Convention cannot therefore be misunderstood in any way. In every passage of the text 'gender' is understood as 'female gender' and is always associated with women, beyond doubt. Right from the preamble it states that "the achievement of thegender equality de jure and de facto is a key element in preventing the violence against women"; we talk about the "structural nature of violence against women, as it is gender-based". Article 3(d) reads "the expression '.gender-based violence against women' means any violence directed against a woman as such". And so on (the whole text can be found here).

Gender identity as it is understood today (self-id) therefore has nothing to do with the Istanbul Convention, which cannot be an instrument of the gender politics and basis for LGBT claims.

Forcing the Convention in this sense harms women.

The Convention belongs to women. And the price of Turkey's exit will be paid by women.

Here are the feminist demonstrations of yesterday

Update, 22 March: As you can see, President Erdogan himself explains his decision to abandon the treaty - a decision that remains intolerable in any case and that will worsen the condition of women in Turkey - with the instrumentalisation of the Istanbul Convention by the LGBT+. The forced and opportunistic interpretation of the word gender as 'free gender identity' offered Erdogan the pretext to shelve the convention presumably with the consent of at least part of the population. This has done serious harm to women, for whom the convention was intended.

Only Feminist Post immediately proposed this reading of the facts.

(ANSA) - ROME, 22 MAR - "As is well known, Turkey was the first signatory of the Istanbul Convention, demonstrating a strong commitment to combating all forms of violence and protecting the status of women in society. Initially, the Istanbul Convention aimed to promote the strengthening of women's rights. then it was manipulated by a sector that is trying to normalise homosexuality, incompatible with Turkey's social and family values. The decision to withdraw from the Turkey contract is based on these reasons". This was stated in a statement by the Ankara Presidency, after the unilateral withdrawal from the Council of Europe document against gender-based violence.

"Our President Recep Tayyip Erdogan strongly reiterates the fact that Turkey will continue to safeguard the safety and rights of all women and underlines the fact that combating violence against women will be a priority on the government's agenda with the zero-tolerance policy," the statement added, stressing that "Turkey will take further measures to improve the effectiveness of existing measures against domestic violence and violence against women as part of the human rights action plan announced in early March."(ANSA).

Feminist Post is produced solely through voluntary work and has no funding.

If you think our work is useful for your life, thank you if you can support us. Even the smallest contribution is precious! Thank you!