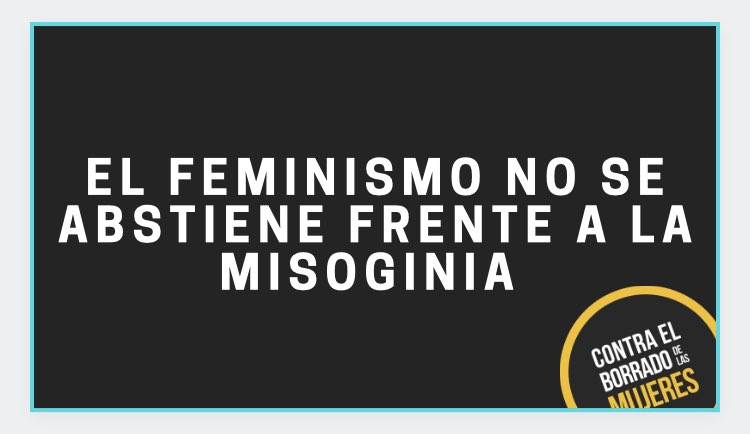 A great victory for Spanish feminism: the government split over the Trans Law, which introduced self-certification of gender, and the abstention of the Psoe blocked the process. A similar law was blocked in the Bundestag. After the stop to self-id in the UK, the transactivists are still in the corner. A boomerang for the Zan bill as well
#ddl Zanarkansasself-certification by genreFinlandGermanyley transpuberty blockerself idspainswedentransitions by minorsUK
Please be aware that the translation of contents, although automatic, has a cost to Feminist Post but is provided to you without any charge. Please consider making a contribution via the "Support us" page if you intend to use our translation service intensively.
The contents of this site are translated using automatic translation systems without the intervention of professional translators.
Translations are provided for the sole purpose of facilitating reading by international visitors.
Share this article

Bad blow for transhumanists78 votes in favour, 143 against and 120 abstentions, the process of the Ley Trans in Spain (gender self-determination) came to a halt.

This is not a definitive victory: Podemos, which proposed the law, announces that it will not stop. But the party has been severely weakened by the recent administrative vote, after which the leader Pablo Iglesias decided to leave politics. Podemos has lost much of its bargaining power. It is unlikely to be able to bring the proposal back on the table. The 120 abstentions are almost all attributable to the Psoe, who, despite being opposed to the Ley Trans (see here) did not want to crush the right-wing no's (in this strongly criticised by feminism). The choice to abstain has however split the government majority.

Today Spanish feminism has many reasons to celebrate. The patient and rigorous information work carried out by the united cartel ContraBorrado on the risks of the law for women, girls and children has borne fruit, hopefully for good. In addition to the free determination of one's gender for adults without any expert opinion or judgement - today in Spain, as in Italy, the 'change of gender' requires a specific medical, psychological and legal procedure - there is also the possibility of a 'gender reassignment'. the Ley Trans intended to extend the 'right' also to children under 12 years of age, and without parental consent (the text of the law here).

Children's transition is the most sensitive issue everywhereafter years of wild and unregulated practice and thousands of transitions (especially of girls, from female to male) Great Britain has introduced the need for a court ruling to authorise puberty blocker 'therapy'.; Sweden said stop; lArkansas has declared these drug treatments illegal; lFinland revised the guidelines, encouraging psychological treatment for 'non-conforming' children.. In Italy, the use of hormone blockers has been authorised and practised for some years, but the numbers of minors treated are unknown.The time has come to get to know them and to do battle.

After Spain, it was Germany's turn. The Bundestag stopped a Gender self-determination bill proposed by the Greens and Neue Linke (see here).

The stop in Germany and Spain (after Great Britain also rejected the self-id) causes an backlash also to the Zan bill under discussion in Italy. The proposal does not explicitly talk about gender self-determination but introduces the concept of gender identity, lintel of the law and forerunner for true self-id goal, as clearly stated by Marilena Grassadonia at the pro-Zan demonstration in Milan (see here), confirmed by the square in Rome and the iconic cover of the weekly magazine l'Espresso.

International news
Radical Feminism, Gender Identity
Femelliste, a gender critical 'sister' platform is born in France
Harassed, insulted, mocked, threatened: French feminists have collected and catalogued the attacks transactivists have suffered for years. And they have set up an information and training site against the dictatorship of transgender ideology
The name of the site is a play on words that cannot be translated into Italian. The site's creators inform that it has already been used by animal feminists such as Posie Parker, Nicole Roelens and the Boucherie Abolition collective. It would make one think of anti-specism, it is actually more and in some respects a little different. 'Femelle' in French means the female animal (for the human one, the same word as woman, femme, is used). Since they fight for sexual rights [...]
Read now
1 2 3 ... 46 Next »