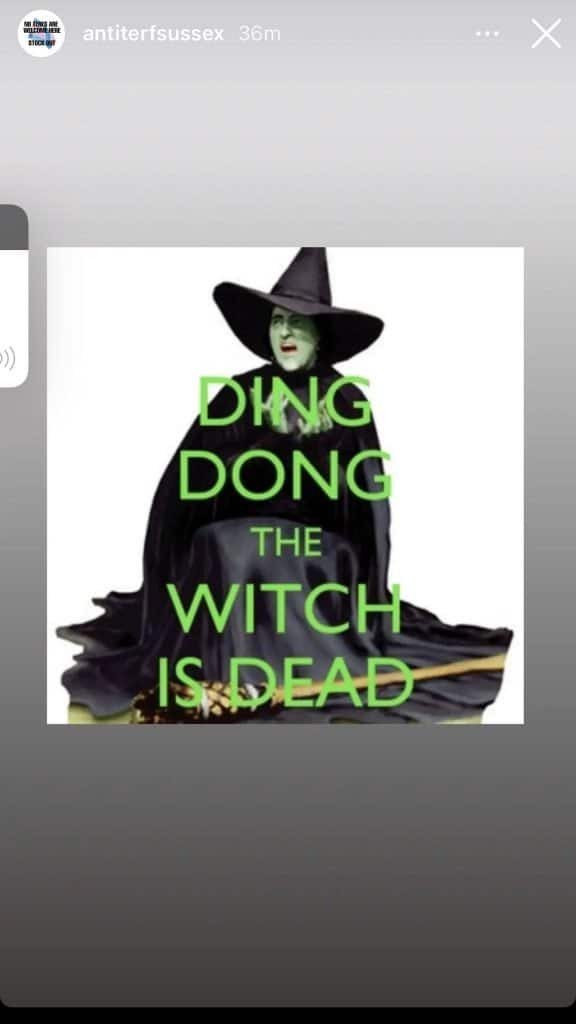 Kathleen Stock has resigned: 'The witch is dead'.

This is how the students of the University of Sussex, who had threatened the teacher and demanded her dismissal, celebrated her resignation. The decision was taken after "an absolutely horrible time for me and my family". Tiepid support from the university, while other academics attack her: her defence of sex against gender reinforces "the patriarchal status quo".
free speechKathleen Stockfreedom by teachingmaterial girsqueerSussex universitytransactivistsUK
Please be aware that the translation of contents, although automatic, has a cost to Feminist Post but is provided to you without any charge. Please consider making a contribution via the "Support us" page if you intend to use our translation service intensively.
The contents of this site are translated using automatic translation systems without the intervention of professional translators.
Translations are provided for the sole purpose of facilitating reading by international visitors.
Share this article

Kathleen Stock, the professor of filosofia at the centre of a controversy over its views on gender identification and transgender rights, announced its resignation from the University of Sussex.

Stock's resignation comes three weeks after a protest by some students on the University of Brighton campus, which included posters and graffiti calling for his dismissal.

Stock is convinced that gender identity does not matter more than biological sex 'when it comes to laws and policies' and that people cannot change their birth sex.

In an email to staff, Adam Tickell, Sussex Vice-Chancellor, said: 'We had hoped that Professor Stock would feel able to return to work and we would have supported her to do so. Instead she felt on the basis of recent events that this was not possible and we respect and understand that decision. We will miss her many contributions, which the university benefited from during her teaching".

Stock tweeted that he was sorry to leave: "These have been very difficult years, but the approach of the leadership more recently has been admirable and dignified. I hope that other institutions in similar situations can learn from this".

He added: "This was an absolutely horrible time for me and my family. I leave it behind me now. Soon to brighter things, I hope."

A university spokesman said: 'In recent weeks, the University of Sussex has vigorously and unequivocally defended Professor Kathleen Stock's right to exercise her academic freedom and legitimate freedom of speech, free from bullying and harassment of any kind. These freedoms and protections apply to all of us and we will defend them now and in the future. Rather than conflicting with our progress on equality, diversity and inclusion, these freedoms and protections also support those in need of protection, particularly those who are under-represented or disadvantaged.

"Universities must remain places where everyone, employee or student, is entitled to and benefits from legitimate free speech. The university has been consistent and clear that everyone in our community has the right to work and learn, free from bullying and harassment of any kind, which was not the case in Professor Stock's case. There have been no substantive allegations of wrongdoing against her. Professor Stock leaves the University of Sussex with our gratitude for her significant contributions as a teacher and academic. Professor Stock's achievements in the field of philosophy have been of great benefit to the university. His departure is a loss.

Michelle Donelan, Universities Minister for England, said: "It is absolutely appalling that the toxic environment at the University of Sussex has made it untenable for Professor Kathleen Stock to continue in her post. No academic should ever fear for their personal safety".

In a post on Twitter Donelan called for 'universities to step up and offer Stock a suitable position in their faculties. We must defend freedom of speech'.

An Instagram account claiming to represent trans students at university posted: "Huge victory for LGBTQ+ students in Sussex today.... Let's take a minute to enjoy it."

Earlier this month Stock said that the police had advised her to stay away from the campus, and that he feared his 18-year career at the university was 'effectively over' after the Sussex branch of the University and College Union called for a survey on institutional transphobiae.

After the protest against Stock, the University of Sussex students' union stated Students have the right to protest when their rights are challenged or when there are discriminatory narratives about them being inclusive." It went on to say that trans and non-binary students complained that they felt threatened and did not have the support of the university.

Labour MP Taiwo Owatemi, shadow minister for equal opportunities, also entered into the controversy after she stated that she was 'concerned'. from Stock's role as a trustee for LGB Alliance, which advocates for rights based on sexual orientation rather than gender identity. But Owatemi emphasised that he was 'not judging Professor Stock's academic work, and did not call for action against her'.

The philosophy teacher was awarded an OBE in the 2021 New Year's Honours List for services to higher education. But hundreds of academics have criticised the decision He signed an open letter stigmatising Stock's comments on transgender and gender non-conforming people.

The letter stated that its "harmful rhetoric' about transgender and gender non-conforming people reinforced 'the patriarchal status quo. Academic freedom entails responsibility; we should not use that freedom to harm people, especially the most vulnerable members of our community," the letter added. Confusing concern for the damage to the work of Stock with threats to academic freedom conceals important issues'.

Italian News, Headlines
Girls, Gender identity
Italian psychoanalysts: stop puberty blockers
The Italian Psychoanalytic Society criticises puberty blockers for children: dangerous and experimental treatment. And joins gender critical feminists and parents in calling for scientific data and a public debate on the best treatment for children suffering from gender dysphoria
For years we gender critical feminists have been fighting against the scandal of the medicalisation of children in the name of gender identity. And for years we have been branded as fascists, reactionaries, bigots. Today at last an accredited Italian scientific society, the Italian Psychoanalytic Society (SPI), is taking a stand, joining us in raising a cry of alarm: the use of puberty blockers is an experimental treatment that has no solid scientific basis, and causes serious side effects. Above all, in most cases dysphoria [...]
Read now
1 2 3 ... 46 Next »