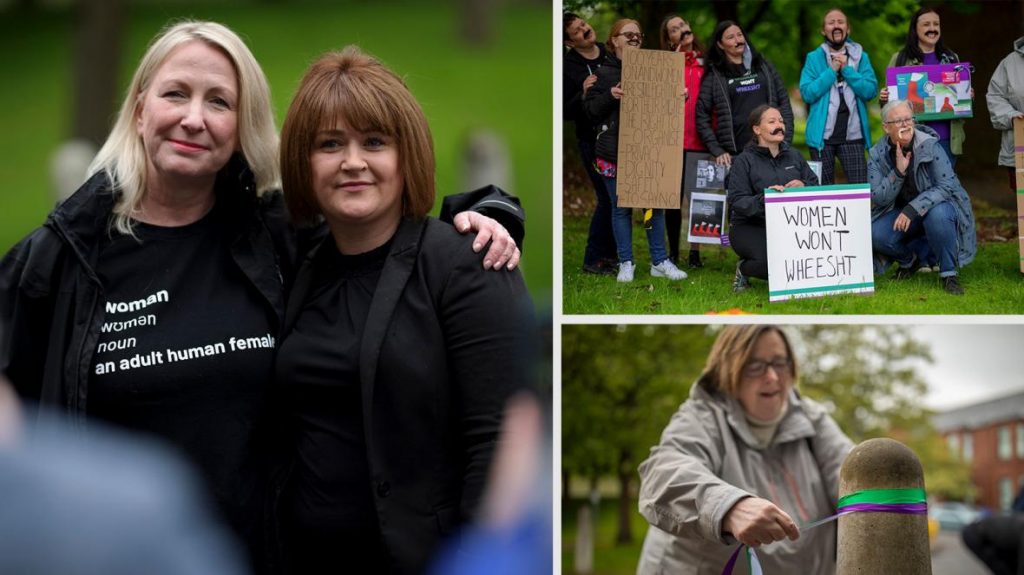 Marion Millar was arrested and released on bail. A number of posts deemed to be homophobic were under indictment. The case to the'attention of feminism worldwide, hashtag #WomenWontWheesht, women will not shut up
#WomenWontWheeshtSELF-IDENTIFICATION BY GENREgendeer recognition actMarion MILLARself id
Please be aware that the translation of contents, although automatic, has a cost to Feminist Post but is provided to you without any charge. Please consider making a contribution via the "Support us" page if you intend to use our translation service intensively.
The contents of this site are translated using automatic translation systems without the intervention of professional translators.
Translations are provided for the sole purpose of facilitating reading by international visitors.
Share this article

Marion Millar, a well-known Scottish feminist, has been charged with hate crime for alleged homophobic and transphobic posts. She faces up to two years in prison.

Millar has been charged under the Malicious Communications Act for tweets published in 2019 and 2020. The messages for which she is under investigation would include a photograph of ribbons in the colours green, white and purple, symbol of the suffragettes, tied around a tree outside the Glasgow studio where a BBC soap opera is being filmed. According to the police report, the tapes represented a noose. The other incriminated tweets are not known.

Millar was arrested and released on bail and is due to appear before the Glasgow Sheriff's Court on 20 July. Her supporters claimed that the prosecution was a attack on women's rights of expression.

Millar walked out of the Coatbridge police station after an almost two-hour interrogation, greeted by applause from a group of female supporters, many of whom were wearing T-shirts with the hashtag '#WomenWontWheesht' -women will not shut up-.

According to Marion Calder of For Women Scotland, it is unbelievable that the police chose to press charges. "These charges are a fundamental attack on our human rights. We still have the right to freedom of thought and the ability to say what we think".

Millar has been very active in the debate on the reform of the Gender Recognition Act and the Scottish Hate Crime Bill, opposing gender self-identification.

Her case has already attracted worldwide attention and the hashtag #WomenWontWheesht was trending on Twitter while Millar was inside the police station.

There were also hostile reactions, with posts calling Terf Millar and his supporters.

A PhD student in Coventry published the photo of a machine gun and tweeted: 'Make a nice list of terf tweeting @WomenWontWheesht because I need some shooting practice'. The message was removed for violation of Twitter rules.

While Millar was being questioned, her comrades tied suffragette ribbons around bollards and trees and there was an impromptu photocall with some women wearing fake moustaches.

Millar is the mother of autistic twins.

Italian News, Headlines
Girls, Gender identity
Italian psychoanalysts: stop puberty blockers
The Italian Psychoanalytic Society criticises puberty blockers for children: dangerous and experimental treatment. And joins gender critical feminists and parents in calling for scientific data and a public debate on the best treatment for children suffering from gender dysphoria
For years we gender critical feminists have been fighting against the scandal of the medicalisation of children in the name of gender identity. And for years we have been branded as fascists, reactionaries, bigots. Today at last an accredited Italian scientific society, the Italian Psychoanalytic Society (SPI), is taking a stand, joining us in raising a cry of alarm: the use of puberty blockers is an experimental treatment that has no solid scientific basis, and causes serious side effects. Above all, in most cases dysphoria [...]
Read now
1 2 3 ... 41 Next »