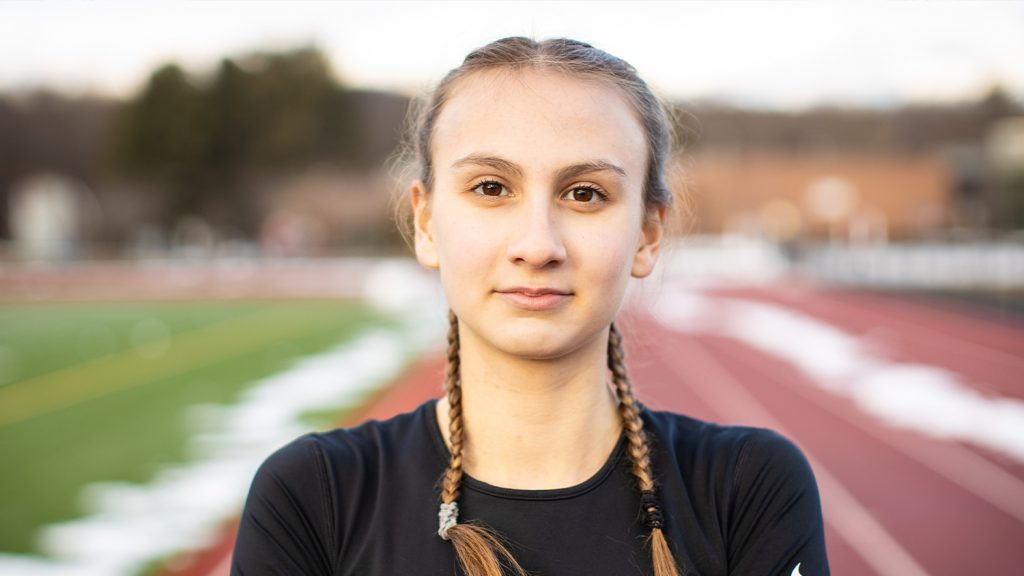 I was the fastest girl in Connecticut. Until I had to compete with men

An omertous silence covers the scandal of the invasion of women's sports by male 'ultra-bodies'. But at last some female athletes, destined for certain defeat, are starting to speak out.
Anna Vanbellinghenathletes transChelsea Mitchellequality actLaurel HubbardOlympics by Tokyosave women's sportssports female
Please be aware that the translation of contents, although automatic, has a cost to Feminist Post but is provided to you without any charge. Please consider making a contribution via the "Support us" page if you intend to use our translation service intensively.
The contents of this site are translated using automatic translation systems without the intervention of professional translators.
Translations are provided for the sole purpose of facilitating reading by international visitors.
Share this article

Anna Vanbellinghen is a Belgian athlete -weightlifting- and At the next Olympics in Tokyo, she will also face New Zealand's Laurel Hubbard, the first trans Olympic athlete. Vanbellinghen says that having any chance with Hubbard is impossible, that this matter is "a bad joke" for the athletes. She is the first of the Olympians to break her silence, and so far the only one to do so.. Vanbellinghen understands that trans women athletes must be able to compete and hopes that a solution will be found, but it cannot be this one: "It's very unfair, for the sport and for the athletes".

One of the very few to have protested against this blatant injustice is the American Chelsea Mitchell. Here is what she says.

February 2020. I'm squatting at the starting line of the high school indoor 55-meter run. This should be one of the best days of my life. I am running in the state championships and am ranked as the fastest female high school runner in the 55 metres. I should feel confident. I should know that I have a strong chance of winning.

Instead, I can only think as All my training, all I have done to maximise my performance may not be enough, simply because there is a runner on the line with a huge physical advantage: a male body.

I won that race, and I am grateful. But then, time after time, I lost.

I lost four girls' state championship titles, two all-New England awards and numerous other podium spots to male runners. I was bumped to third place in the 55-yard dash in 2019, behind two male runners. After each defeat, it becomes more and more difficult to try again.

It is adevastating experience. It tells me that I am not good enough; that my body is not good enough; and that it doesn't matter how hard I work, I am unlikely to succeed because I am a woman.

This experience is the reason why I and three of my female colleagues we filed a lawsuit last year with Alliance Defending Freedom against the Connecticut Interscholastic Athletic Conference (CIAC)because girls and women must not be deprived of their right to fair competition.

The CIAC allows biological males to compete in women's sports. As a result, two males began running on the girls' track in 2017. In the 2017, 2018 and 2019 seasons alone, these males won 15 girls' track and field state championship titles (titles held in 2016 by nine different girls) and had more than 85 opportunities to participate in higher-level competition for female athletes.

This is because males have enormous physical advantages. Their bodies are simply and on average bigger and stronger than female bodies. For every single girl on the track this is a matter of course.

But Connecticut officials are determined to ignore the obvious. And unfortunately, a federal district court has recently rejected our cause. This decision tells women and girls that their feelings and opportunities do not count, and that they cannot expect anyone to defend their dignity and rights.

This is wrong. E affects women's confidence in their own abilities.

It has happened to me over and over again. Every time I walk to the starting line, I try to tell myself that I can overcome obstacles - I can win, even if the odds are against me.

But in addition to psychological distress of experiencing unfair defeats over and over again, the CIAC policy causes tangible damage to women. It robs girls of the chance to run in front of college scouts who show up for elite competition, and to compete for scholarships and all the opportunities that come with college recruiting. I will never know if my college recruiting was affected by losing those four state championship titles to a male. When colleges looked at my record, they didn't see the fastest girl in Connecticut. They saw second or third place.

And it's not just happening to me. My friend and colleague Selina Soule was excluded from qualifying for the 55-meter state championship final and from the opportunity to qualify for the New England championship due to a male runner in 2019. Meanwhile, Alanna Smith, a very talented female athlete, was the runner-up in the 200 metres at the New England regional championships, but fell to third place defeated by a male competitor.

It is disheartening that the federal district court decided that these experiences - these missed opportunities - simply do not count.

But I am not yet defeated. And neither are my fellow athletes.

Through our Alliance Defending Freedom lawyers, my colleagues and I are appealing the federal district court's ruling. We are taking our case to the US Court of Appeals. for a second step, in which we will once again ask the court to recognise our right to fair competition - a right that we have no right to. Title IX (the amendment prohibiting discrimination on the basis of sex in state-supported education programmes) has been promising girls and women for 50 years. And we are fighting not only for ourselves, but for all female athletes. So, as we prepare for this new phase of the cause, I'm setting up in the starting blocks again, but for a different kind of race. And this time, I am confident that we can win..

International news
Gender identity
SPAIN: SOCIALISTS AGAINST THE TRANS LEY
Unlike their Italian counterparts from the PD and the left who stand for free gender identity, the Spanish progressives break with the PSOE's transactivist policies in defence of women and children. In their manifesto the excellent arguments against what, if passed, could be the worst transactivist law in the world
Breaking with its party, the PSOE, and sending a signal to the women of the European left, who are generally aligned in defence of transactivist diktatism, the Federación de Mujeres Progresistas launches a courageous manifesto against the Trans Law wanted by the governing majority in Spain (PSOE and Podemos) and being approved by an emergency procedure, without an effective parliamentary debate or a wide public discussion. The initiative also comes in response to the clamorous break between historical Spanish feminism -united in the Contraborrado cartel- [...].
Read now
1 2 3 ... 26 Next »