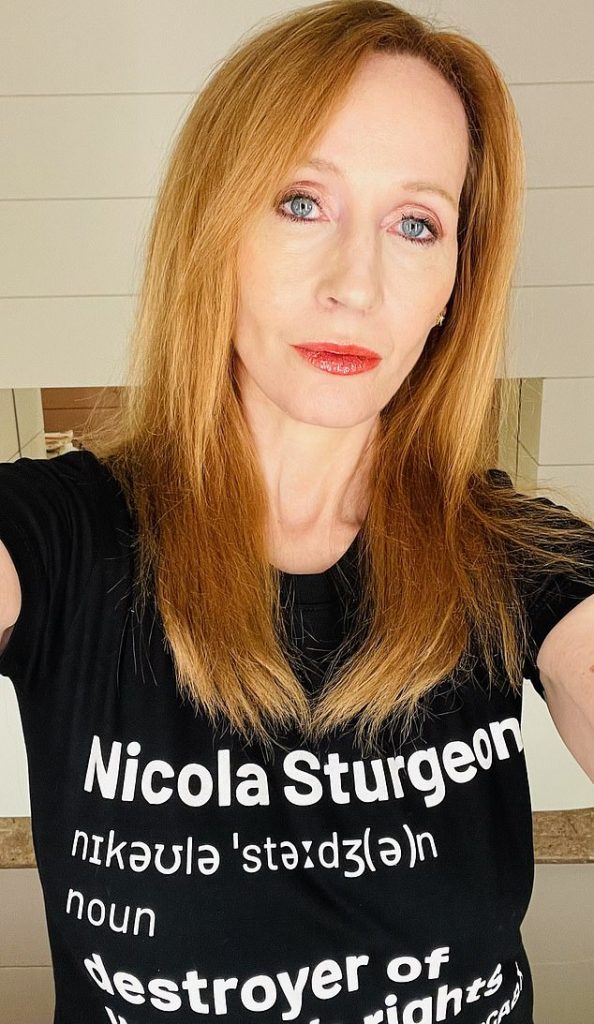 'Destroy women's rights': JK Rowling against the Scottish premier and her trans law

As in Spain, feminism in Scotland fights against a law wanted by First Minister Nicola Sturgeon introducing gender self-determination without any medical diagnosis and lowering the age for access to 16. And this time too, the Harry Potter author stands by women, girls and children
for women scotlandidentity by genreJK Rowlingnicola sturgeonscotlandself id
Please be aware that the translation of contents, although automatic, has a cost to Feminist Post but is provided to you without any charge. Please consider making a contribution via the "Support us" page if you intend to use our translation service intensively.
The contents of this site are translated using automatic translation systems without the intervention of professional translators.
Translations are provided for the sole purpose of facilitating reading by international visitors.
Share this article

JK Rowling takes photo of herself in a T-shirt that says: 'Nicola Sturgeon, destroyer of women's rights' to support women protesting in front of the Scottish Parliament against the controversial gender recognition reform law wanted by the Scottish First Minister.

The activists of For Women Scotland (Scotland for women) gathered this morning in front of the Scottish Parliament for a demonstration against the bill promoted by Sturgeon, which would make gender self-determination easier - we called it a 'super Self-ID'- endangering the rights of women, girls and children.

The demonstration in front of parliament was organised at a meeting of the committee that is discussing the approval of the bill.

Posting a photo of herself wearing a T-shirt with the words against Nicola Sturgeon JK Rowling wanted to support the group. "I stand in solidarity with @ForWomenScot and all women protesting and speaking out outside the Scottish Parliament. #NoAlSelfID" was her tweet.

According to documents filed by the Scottish government along with the bill, With the reform, requests for such recognition would increase from 30 to 250-300 per year.

Five members of the committee supported the bill, while the two conservatives Pam Gosal and Rachael Hamilton opposed it.

The bill provides for speeding up the time to obtain a registry sex change and lowering the age for obtaining it from 18 to 16. Furthermore, with the new law a diagnosis of gender dysphoria will no longer be necessary, eliminating the obligation to submit medical certificates.
The length of time a person must have lived in their 'acquired gender' before applying would be reduced from two years to just three months.

The majority of the committee was in favour of eliminating the need for medical evidence or diagnosis, 'believing that trans people know their own mind'. However, some committee members are 'concerned that removing the requirement for gender dysphoria and the need for medical evidence could extend the gender process to a large and more diverse group of people'. They fear, in short, that this "could potentially mean that the process is open to abuse by actors in bad faith, particularly predatory men'.

They were raised concerns also about the impact the reform might have on the spaces reserved for women and girls, such as women-only bathrooms or changing rooms.

Insights
Gender identity, Male violence
Girls removing their breasts
Transactivist propaganda invites girls uncomfortable with their female form to compress their breasts with special bands (binders), the first step towards the final mastectomy. The same misogynistic violence as the traditional 'breast ironing' practised in Africa. In the UK, the publicly funded charity Mermaids is under indictment for sending binders to teenage girls against parental advice.
Breast ironing is a horrible practice still in use in some regions of Africa, particularly in Cameroon. It involves the destruction of the breasts of adolescent girls by red-hot instruments -old irons, spatulas, stones or shells- and is generally practised by the adult women of the family. The purpose is to make the girls less attractive in order to save them from rape and early pregnancies that could tarnish the honour of the family group. The practice causes serious damage to the health of teenage girls, [...].
Read now
1 2 3 ... 42 Next »