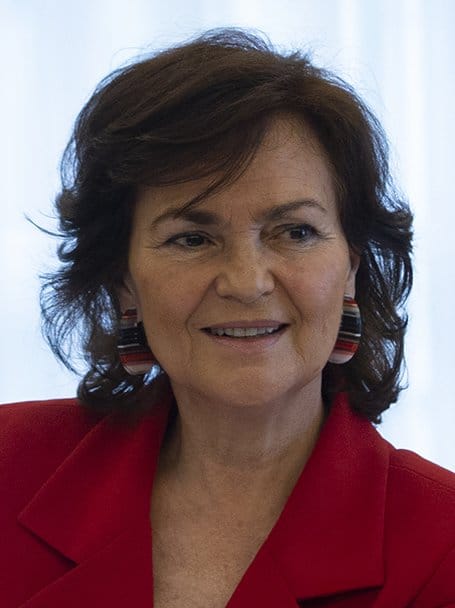 Carmen Calvo, Spain's valiant vice-premier. After the no to the Ley Trans she is now thinking of an anti-prostitution law

Carmen Calvoirene monteroley transprostitutionpsoespainroute
Please be aware that the translation of contents, although automatic, has a cost to Feminist Post but is provided to you without any charge. Please consider making a contribution via the "Support us" page if you intend to use our translation service intensively.
The contents of this site are translated using automatic translation systems without the intervention of professional translators.
Translations are provided for the sole purpose of facilitating reading by international visitors.
Share this article

Spanish vice-premier Carmen Calvo -Psoe- does not allow herself to be influenced or intimidated by the trans-feminist mainstream (which tries to intimidate her in every way, see here). In addition to opposing the Trans Law, which was strongly advocated by her government colleague, the Minister for Equality, Irene Montero (Podemos) - a law which is unanimously opposed by Spanish feminism - she has now announced a law against prostitution.

That Calvo is an inspiration for the policies of the Italian left, particularly those that support free "sex work" and the intangible and dangerous "gender identity". -or keep quiet to avoid getting into trouble.

In this interview his brave and precise words.

Carmen Calvo, Spanish vice-premier, builds a new wall against Igualdad minister Irene Montero (Podemos) and announces a state law banning prostitution. The abolitionist proposals raise doubts within Podemos and are not part of the programme of the Ministry of Equal Opportunities. Carmen Calvo, on the other hand, announced on Sunday aforthcoming national abolitionist legislation that will prohibit prostitution throughout Spain and that "will honour us as a democracy".

Calvo thus raises a flag widely defended by socialist feminism, which instead creates many problems for the leadership of Podemos, the government's minority partner. "There will certainly not be unanimity, but there will be a broad consensus in the majority."he assured. "The PSOE recognises itself in this struggle"Calvo said in the online session against trafficking and prostitution.where the quality of democracy in this country is at stake.".

Calvo thus scored a clear border between the unequivocal position that socialists have always held on this issue in the face of the hesitations and the open debate that continues to shake the purple formation (Podemos). A year ago, the party even distanced itself from its coalition partner -Izquierda Unida- by abstaining in the vote on the request for an abolitionist law to the government, an initiative that is not part of the programme of the Minister for Equal Opportunities, Irene Montero.

In fact, the socialists claim not to rely so much on the Istanbul Convention, Ministry's Bible for Equality, and to make more reference to the New York Conventionwhich focuses on exploitation as the key to trafficking in women and girls.

"Trafficking exists because there is prostitution"said Calvo, for whom prostitution is a "founding element of patriarchy"as "objectifies women as commodities that can be bought and sold". "Prostitution"defended his position "it is not work, it is slavery".

L'abolitionism has a long history and argues that it is not possible to build a democratic society if there are prostituted and enslaved women. "Where prostitution is regulated, trafficking has increased"she said, opposing any kind of legalisation of what some defend as a 'space of freedom for women'. Which, in her view "is nothing but a hoax. "

"Brothels are neighbourhood guantánamos where women live in illegal limbo."he said, before assuring that the PSOE will present the a bill to prohibit prostitutionI am confident that all women in Congress and the Senate will support the initiative.

"We will not let ourselves be charmed by the siren songs that hide this reality behind new words according to which women find themselves in this situation because they are the masters of their own bodies.". All this conceals "old ideas not respectable"he said.

Carmen Calvo also anticipated the government's willingness to strengthening sexual and reproductive education so as not to leave it in the hands of pornography. "There is no greater freedom than that based on responsibility"he said, stressing that "we will go knocking on the doors of the autonomous communities, municipalities and Europe to achieve this.".

"It's not about anything else"stressed "than to make policy and move all the pieces, using all existing legislation, as well as social, educational, health and protection policies. And to do this in all areas, from the government of the nation to the municipal councils ".

In this sense, and taking advantage of the pre-electoral climate in Madrid, Calvo said that it would be ideal for the Community of Madrid led by Ángel Gabilondo to "to join the network of autonomous authorities that do not renounce equality policies ".

International news
Radical Feminism, Gender Identity
The global abolition of sex
The law just passed in Scotland replacing sex with free choice of gender. The one being passed in Spain. And Germany's project. In her article in Newsweek, Kara Dansky also warns the United States about self-id. But from Great Britain, Sweden and Finland come signals in stark contrast: the game is still to be played.
22 December was a black day for gender critical feminism: in spite of lively protests outside Parliament, Scotland passed the law allowing gender self-identification or self-id -without exception for sex offenders who will be able to freely access women's spaces by identifying themselves as women. Also in Spain, the Ley Trans, which has a very similar structure, has passed the first step in the lower house and is on its way to final approval in the coming weeks [...].
Read now
1 2 3 ... 35 Next »