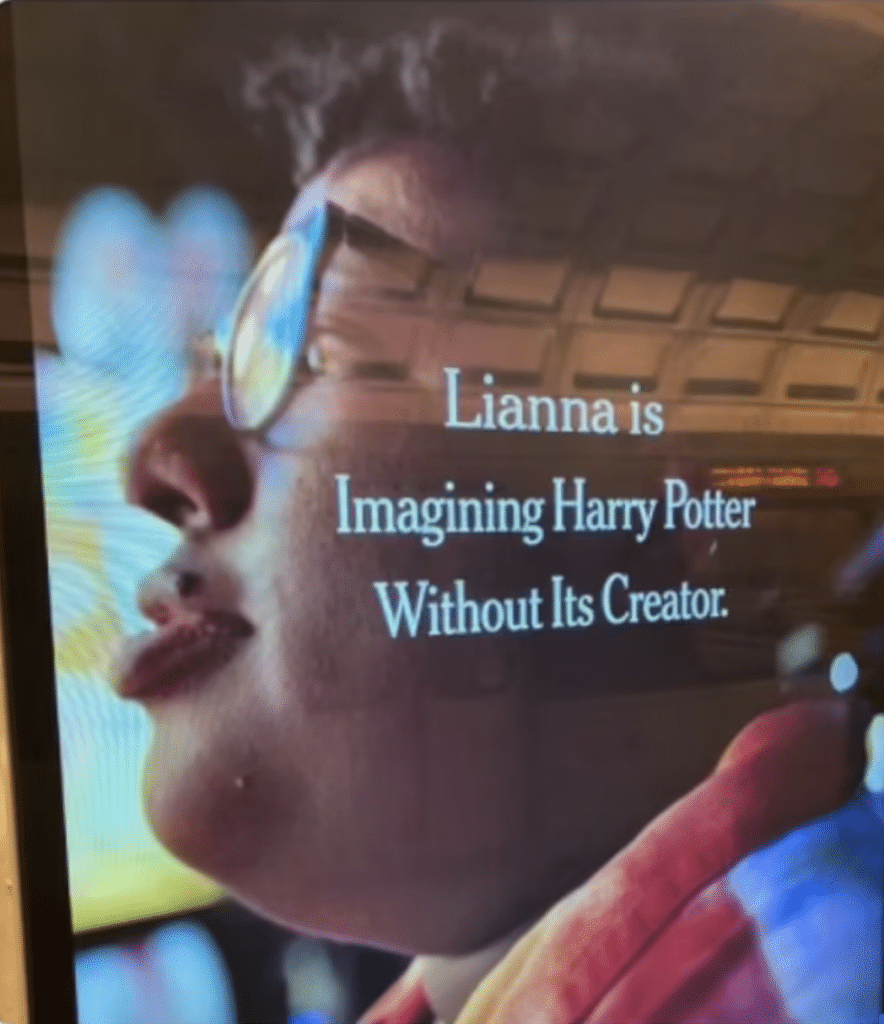 A violent subscription campaign in the US newspaper invites people to imagine Harry Potter without its creator: the ultimate in cancel culture. A misogynistic and aggressive gesture that could inspire real ones. But the initiative turns out to be a boomerang and many female subscribers threaten to cancel.
cancel culturesharry potteridentity by genreJK Rowlingnew york timestransgenderwokeness
Please be aware that the translation of contents, although automatic, has a cost to Feminist Post but is provided to you without any charge. Please consider making a contribution via the "Support us" page if you intend to use our translation service intensively.
The contents of this site are translated using automatic translation systems without the intervention of professional translators.
Translations are provided for the sole purpose of facilitating reading by international visitors.
Share this article

According to the New York Times JK Rowling has to go.

A violent season ticket campaign on electronic billboards invites readers to 'imagining Harry Potter without its creator'.: cancel culture to its fullest extent, the ultimate of the wokeness.

Unable to take out the creature that has taken on a life of its own (the books in the Harry Potter saga are among the best-selling in the world) you 'kill' the creator. Words are stones, and from the symbolic to the real, the step is shorter than one imagines.

After all, if mothers are to disappear, even JK Rowling can become a mere passing container.

The T-lobby inside the NYT must be really powerful to have managed to impose such a campaign: perhaps it is not unnecessary to recall the fact that JK Rowling has been persecuted for years - including death threats and transactivist commandos stationed outside her home - for the simple fact that she claimed that biological sex is real and that women should be called women, not menstruators. All this, according to his enemies, is transphobia.

The hope is that for the NYT this campaign will be a boomerang, and a large number of people cancelled their subscriptions. Critical reactions were many.

"I cancelled my @nytimes subscription because he tried to delete @jk_rowling', someone tweeted. Another tweet: 'We're trying to imagine the NY Times without its marketing department, without its editors, without its owners, without its Op-Ed columnists, and without its loyal subscriber base.'

"One imagines @jk_rowling magically vanishing into a puff of pixie dust, or are they contemplating a disappearance more akin to Jimmy Hoffa's?" (Hoffa is the American trade unionist who mysteriously disappeared in 1975, ed.).

"Not even the offer of an annual subscription to $ 0.25 per week could convince me to stay with a newspaper that is so contemptuous of women. to celebrate the deletion of an author in her advertisements'.

JK Rowling is the richest author in the world, she has enough money to paying a legal team that she pursues this horrible initiative of the NYT. We hope she does, for herself and for all of us.

International news
Girls, Gender identity
California, transfusion of children
The American state proposes itself as a 'health' tourism destination for minors who are unable to access transition where they live. Exempting the parents and relieving the operators of any risk of litigation in the event of subsequent 'repentance'. Meanwhile in the UK, after the closure of the Tavistock, eyes are on a Scottish clinic where the experimental model (puberty blockers and surgery) continues to be applied
There is a real war going on in the United States over the ideology of gender identity and its promotion in schools. A 'culture war' pitting the elites, who fund and promote gender ideology, against the ordinary people who oppose it (see the Disney case here). While Biden from day one has made many legislative concessions to trans activism at the federal level, the Republicans have intercepted the discontent of the citizenry with various counter-legislation at the state level, such as [...]
Read now
1 2 3 ... 43 Next »