From you, Italian news
Gender identity
6 May 2021 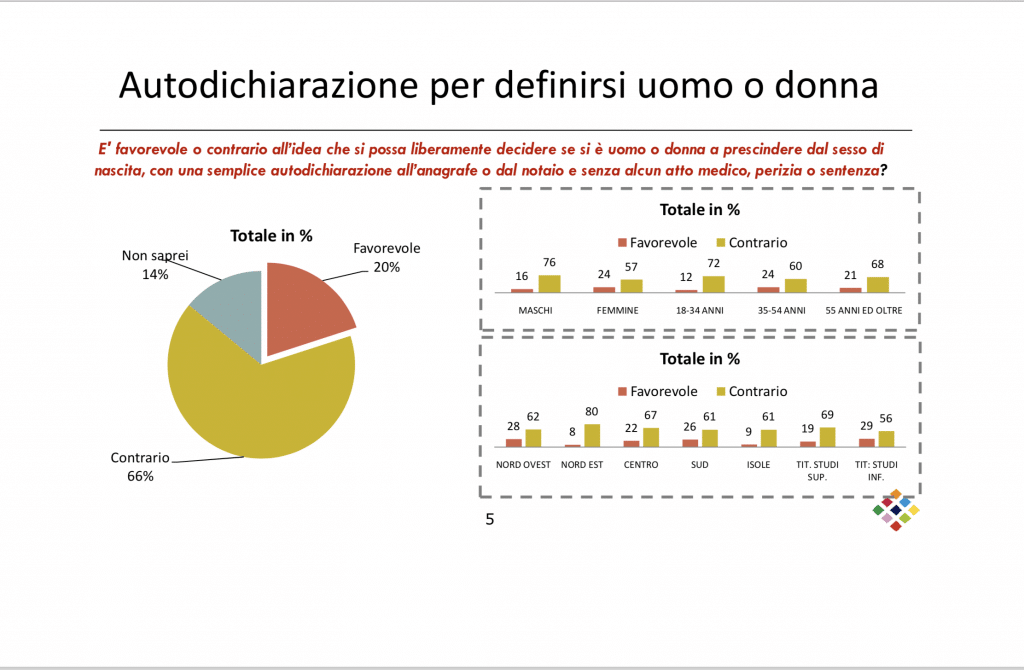 athletes transblockers hormonesddl zanidentity by genreself-idsurvey
Please be aware that the translation of contents, although automatic, has a cost to Feminist Post but is provided to you without any charge. Please consider making a contribution via the "Support us" page if you intend to use our translation service intensively.
The contents of this site are translated using automatic translation systems without the intervention of professional translators.
Translations are provided for the sole purpose of facilitating reading by international visitors.
Share this article

The survey you see (crowfunded by feminist associations including Se Non Ora Quando, RadFem Italia, Libreria delle Donne, Udi and others) does not measure the general consensus on the Zan ddl, but aims at the true core of the bill: gender identitythe free perception of oneself irrespective of one's sex of birth -or, as we say today, attributed at birth-, totally dematerialised.

The battle over gender identity has raged halfway around the world: Spain, Germany, all the way to Peru. In Britain it ended with the defeat of the supporters of perceived gender.

The survey instead focuses on three aspects of the issuestarting with the self-id or free self-certification of gender with a simple deed to the registry office, without expert opinions or judgments: nhe majority of those against, 66%, with a slight predominance of men, the youngest and most educated. Only 20% is in favour; 14% is silent. With considerable social impact, self-id is already law in Canada, Malta and other countries.

The hormonal blockage of puberty - few know it - is authorised in Italy by simple medical expertise. In Great Britain, however, a court approval is requiredthe turning point after theexponential increase, + 4000% in a few years, of transitions between girls (mostly) and boys, and after the case won by the very young detransitioner Keira Bell against the National Health Service (in Sweden the treatment of minors with hormones has been banned these days).

Interviewed a few days ago by Guardian psychiatrist David Bell, formerly with the Gender Identity Development Service (GIDS) at the Tavistock Clinic in London, said that the children, often rushed into therapy, in many cases 'are gay... some are depressed' or suffer from 'anorexia, autism or have a history of trauma'.

Finally, the participation of trans women athletes in women's sports: a well-known case in Italy, the Paralympic sprinter Valentina Petrillo. Here too a majority of those against: 56% (69% among men, who normally pay more attention to sport), 30% those in favour, 14% those not sure.

In the US it is a major political issue. In the first 24 hours of his term of office Joe Biden issued a executive order allowing trans women athletes in women's sports: the battle in the states rages, the global network Save Women's Sport fights, many female T athletes are preparing for the Olympics. Right now she is at the centre of a furious shitstorm. trans icon Caitlyn Jenner, former Olympic decathlon champion, stepfather of Kim Kardashian and running for governor of California. And just for saying, as an athlete, that it seems unfair for transwomen to compete with women.

This is what gender identity is, and it is at the heart of the Zan bill. How many people know about it?

Approved hastily in the House In November, when the intensive care units were filling up, the bill was preparing for the final rush to the Senate. "That text is not going to be modified!": Monica Cirinnà closes a debate that has never been opened.

Sensitive topics such as divorce, abortion and assisted reproduction have engaged Italian society in debate for years. Gender identity is an even more sensitive issue, having to do with human sexuality and the materiality of bodies reduced to insignificance: a true anthropological revolution.

In 1984 Ivan Illichfather of European environmentalism, prophesied the annulment of sexual difference, "unprecedented change in the human condition". The market will demand the neutrum oeconomicumfluid, flexible, fungible subject. A 'disappearance of gender that degrades women more than men', the language will be 'simultaneously neutral and sexist'.

With the goodwill of Senator Cirinnà, here there is really a lot to discuss.